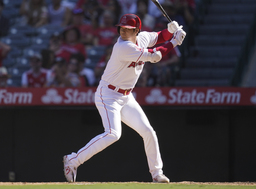 SAN DIEGO (AP) Even though Shohei Ohtani is back in Japan for the offseason, he has been in frequent contact with Los Angeles Angels general manager Perry Minasian about the team's offseason moves.

"We talk a lot. He's asking me daily who we're getting," Minasian said during baseball's winter meetings. "He's into it. We have a lot of players like that. Mike (Trout) and Anthony (Rendon) are like that. I think it's a very motivated group.

"They want to see activity. They want to see the organization making a commitment to making the team better. We'll see how it shakes out when we get to spring training what exactly we have, but we're going to continue to look for opportunities to improve," he said.

Minasian also reiterated his support for Ohtani taking whatever role he deems best for Japan during the World Baseball Classic in March. Ohtani said he is open to being a reliever.

"I don't have any issue with whatever he does. He's not one I'm worried about," Minasian said. "He knows what he needs to do to get ready for the season. I know when the bell rings, he'll be ready to go. There's a comfort and trust to that."

The Angels' offseason moves, their future owner and the team's performance will all be under the microscope as the two-way Japanese superstar begins his final season before hitting free agency.

Ohtani agreed to a $30 million contract for next season in September. After winning the AL MVP award in 2021, Ohtani finished second to New York Yankees slugger Aaron Judge after going 15-9 with a 2.33 ERA on the mound and batting .273 with 34 home runs and 95 RBIs.

Despite Arte Moreno putting the team up for sale, the Angels have been proactive since the season ended. They acquired outfielder Hunter Renfroe from the Milwaukee Brewers and infielder Gio Urshela from the Minnesota Twins. They upgraded the rotation by signing Tyler Anderson and added to the bullpen with Carlos Estevez.

Minasian said the message from ownership has been business as usual.

"I know we've spent more money, I guess. But I mean nothing's been drastically different for me. I think there have been more things that have presented themselves that made sense, compared maybe in previous offseasons, where we were and what we were trying to do," Minasian said.

Commissioner Rob Manfred said on Tuesday that multiple groups have expressed interest in the Angels with a possibility that a sale could be completed by opening day.

Manager Phil Nevin also is on a one-year deal as the Angels try to end a string of seven consecutive losing seasons and eight consecutive years out of the postseason after going 73-89 this past season. Both are the longest active skids in the majors.