Star-studded Padres and Mets square off in wild-card round 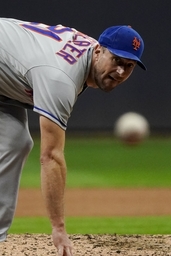 NEW YORK (AP) For two teams that finished second fiddle in their divisions, the Padres and Mets bring an awful lot of star power into the playoffs.

Manny Machado, Juan Soto and Yu Darvish on the San Diego side.

A couple of baseball's biggest spenders, one from each coast, primed to square off in a best-of-three National League wild-card series at Citi Field beginning Friday night. Two wins earns a Division Series date with the powerhouse Dodgers.

"This is not playing the long game here. This is the short game," Mets manager Buck Showalter said Thursday. "It's a different time of the year."

No doubt, both clubs feel the pressure and urgency that comes with knowing one bad weekend means the sudden end of a promising season filled with big expectations.

San Diego entered with eyes on winning the NL West and - even though Los Angeles ran away with the division title - the Padres stamped themselves World Series contenders by acquiring Soto and All-Star closer Josh Hader in a huge splash at the Aug. 2 trade deadline.

They didn't take off on the tear some anticipated, but the Padres (89-73) won enough to earn the second NL wild card despite finishing 22 games behind the Dodgers.

"We have some great characters on this team," Darvish said through a translator. "It's a fun clubhouse."

Powered by Pete Alonso and big league batting champion Jeff McNeil at the plate, New York (101-61) sat atop the NL East for all but six days this season.

But even after leading by 10 1/2 games on June 1 and seven on Aug. 10, the Mets were unable to hold off the Braves. The defending World Series champions snatched away their fifth straight division crown and a first-round playoff bye on the strength of a head-to-head sweep in Atlanta last weekend.

New York must shake off that major disappointment - fast.

"Yesterday's news," said Lindor, who set a career high with 107 RBIs as the Mets won the second-most games in franchise history. "We've got to focus on what's in front of our feet."

Both teams worked out for an hour Thursday under a clear sky at Citi Field. Nice weather is forecast all weekend, though night-time temperatures around 50 degrees could feel a little chilly to San Diego players.

The Padres went 4-2 against New York during the regular season, taking two of three at Citi Field in July even before acquiring Soto, Hader, Josh Bell and Brandon Drury.

"We should feel good about that. It does not apply in this series," manager Bob Melvin said. "You try to bring that momentum with you. But it's a different ballgame now."

Darvish was the NL pitcher of the month for September after going 5-1 with a 1.85 ERA. The right-hander from Japan is 5-0 with a 2.56 ERA in eight career starts against New York, allowing only one run and six hits with 15 strikeouts over 14 innings in winning both outings this year.

"I think that was luck," Darvish said. "I'm going to try to be not too, too excited and not too amped up."

Left-hander Blake Snell and hometown favorite Joe Musgrove follow in the rotation for the Padres.

The 38-year-old Scherzer said he's fully healthy after oblique issues landed him on the injured list twice this year. The three-time Cy Young Award winner is 7-6 with a 3.22 ERA in 26 postseason games (21 starts).

"It's going to take everything out of us to be able to move on," he said about the Padres. "They've got a lot of ways to beat you."

New York has not committed to a Game 2 starter, and the result of Game 1 could determine whether deGrom or Chris Bassitt goes next. Showalter said deGrom, a two-time Cy Young Award winner who scuffled down the stretch, has been dealing with a blister that shouldn't be an issue by the time he pitches.

The hard-throwing Hader struggled after arriving in San Diego from Milwaukee, but Mets righty Edwin Diaz has arguably been baseball's best closer this season.

The crowd at Citi Field gets revved up when he enters to "Narco" by Blasterjaxx & Timmy Trumpet. But it's on the mound where Diaz really lets loose, with a 1.31 ERA and a whopping 17.1 strikeouts per nine innings.

Regardless of which team is trying to protect a slim lead, fans are sure to see some wipeout sliders and serious heat.

Showalter, taking his fourth franchise to the playoffs, was the Orioles' manager when Machado began his brilliant career in Baltimore.

"I kind of know his tactics a little bit," Machado said. "We know that we have our hands full."

Showalter even managed Melvin when the latter was a backup catcher with the 1994 New York Yankees, and Melvin said the two played against each other in Double-A. Both have won three Manager of the Year awards but are still seeking their first World Series appearance.

"It does come full circle," said Melvin, who has guided three organizations to the postseason. "A lot of what I do now was influenced by him. ... I watched him very closely over the years."

Meanwhile, Scherzer and Soto forged a friendship while winning a World Series championship together in 2019 with Washington.

"It's fun," Scherzer said. "Baseball always does the craziest things. ... Obviously, he's a great hitter. It's going to take everything out of me, every pitch I've got, in order to get him out."

While the Padres have been without star shortstop Fernando Tatis Jr. all season because of a wrist injury and PED suspension, the Mets have been minus All-Star right fielder Starling Marte since early September. Marte broke the middle finger on his right (throwing) hand when hit by a pitch and sounds doubtful for this series.