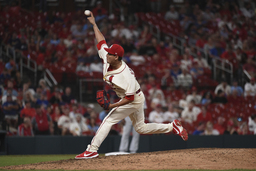 ST. LOUIS (AP) Reliever Giovanny Gallegos and the St. Louis Cardinals agreed Monday to an $11 million, two-year contract, a deal that includes a club option for 2025 and escalators that could make it worth $20.5 million over three seasons.

"I feel so happy," Gallegos said Monday before the Cardinals played the Pirates in Pittsburgh. "I don't have the word for exactly how I'm feeling."

He was obtained from the Yankees in July 2018 along with left-hander Chasen Shreve in the trade that sent first baseman Luke Voit to New York. Gallegos is 14-15 with a 3.02 ERA and 34 saves in six major league seasons.

He would get $250,000 for winning the Rivera/Hoffman reliever of the year award, $50,000 for All-Star selection and World Series MVP and $25,000 for League Championship Series MVP.

Gallegos has a $2.41 million salary this year.