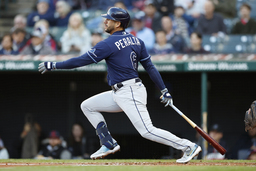 CLEVELAND (AP) Small plastic strips dangled from the ceiling in Tampa Bay's clubhouse, which had been cleared of furniture and prepped over the final innings for what was supposed to be a wild, wet celebration.

The Guardians had other plans.

Cleveland rookies Oscar Gonzalez and Steven Kwan drove in runs in the eighth inning as the Guardians prevented the Rays from clinching one of the AL's three wild-card spots, rallying for a 2-1 win on Thursday night.

The Central champion Guardians took two of three games in a tight series - and potentially a playoff preview. Two games went to extra innings and all three were decided by one run.

After Baltimore lost in Boston earlier, the Rays took the field needing a win to make the postseason for the fourth year in a row. But they couldn't hold off a Cleveland team that has fought back all season.

"Kind of been our m.o. all year long," Quantrill said. "You can't put us away. I don't think we're a very fun team to face."

Coolers filled with beer and Champagne were wheeled in and out of Tampa's clubhouse as the Rays packed their gear and left for Houston still a win away from making the postseason field.

"There's disappointment any time we lose," said Rays manager Kevin Cash, not wanting to put any extra emphasis on one game that slipped away late. "The disappointment is we were up in the eighth inning and we lost."

Tampa Bay had a chance in the ninth inning, loading the bases on three walks by reliever Trevor Stephan. But he struck out Ji-Man Choi and then got Isaac Paredes to fly to short right to earn his third save.

"That's a really good team," said Quantrill, who remained unbeaten at Progressive Field in 33 starts. "I know a couple of guys on that team. I like that team. But we don't want them to celebrate here.

"They can go celebrate wherever they're heading next. It's not about proving we can beat them. It comes back to proving that we can continue to play the game the way we want to play it."

The Guardians have 37 come-from-behind wins and they extended their team record to 29 victories in their final at-bat. Enyel De Los Santos (1-0) pitched a perfect eighth as Cleveland improved to 20-4 since Sept. 4.

Shut out for seven innings, the Guardians got a pinch-hit single off Shawn Armstrong (2-3) from rookie Will Brennan to start the eighth. Myles Straw then sacrificed and Kwan doubled to tie it 1-all.

The Rays walked the dangerous Jose Ramirez with two outs to face Gonzalez, who hit a slow roller to the right side just out of Choi's reach at first as Brennan scored.

"I felt bad for Army," Cash said. "He threw the ball so well and Gonzalez swings at a pitch that almost hit him and just found that perfect spot."

Cleveland's comeback kept Quantrill's perfect mark at home intact. The right-hander allowed just one run and three hits in six innings but appeared to be on his way to a tough loss before his teammates rallied.

Ramirez has been intentionally walked an MLB-leading 20 times (Yankees slugger Aaron Judge is second with 18) this season, the most by a Cleveland hitter since the statistic was officially tracked in 1955.

While the Tampa Bay-St. Petersburg area was spared a direct hit from Hurricane Ian, the slow-moving storm caused massive flooding and damage across Florida.

"St. Pete and the Bay area did OK, but our friends and family and co-workers in Port Charlotte and Fort Myers not so much," Cash said. "So want to send some well wishes to them that we're thinking about them and know that it's a pretty trying time."

The Guardians brought up catcher Bo Naylor, first baseman Josh's younger brother, to be on their taxi squad. He can work out with the team before games, take a spot on the bench during them and catch bullpen sessions.

The 22-year-old, who split the season between Double-A Akron and Triple-A Columbus, said his brother was thrilled to have him around.

"Everything that I tell him, he's over the moon for it," Naylor said. "He's a really supportive brother and with everything that goes on, he's always behind me 100%. It's really good to be able to be with him here and be able to share this experience with him."

Guardians: RHP Zach Plesac (broken hand) will make his first start since Aug. 27 on Saturday. He was initially scheduled to pitch Friday, but the team made the switch so Aaron Civale will be lined up to pitch Game 1 of the AL Division Series if Cleveland advances.

Guardians: Civale (3-6, 5.19) starts the opener of a six-game series against Kansas City to finish the regular season. The Royals will counter with RHP Brady Singer (10-4, 2.99).