In the interim, Thomson leads Phillies to brink of playoffs 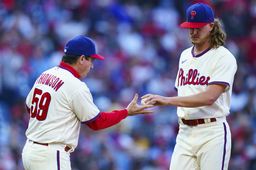 PHILADELPHIA (AP) Rob Thomson has the sparse office decor of a manager who still has interim in his title. He also has the Philadelphia Phillies on the brink of their first playoff berth in 11 years.

Get there -- and end the longest postseason drought in the National League -- and maybe Thomson can hang a few more keepsakes. The ones already on the wall are mostly framed newspaper pages with boldface headlines of the greatest moments of the Phillies' last heyday, reminders of the success the franchise has yet to duplicate during the trying slog of a decade since 2011.

The man in the middle of the framed photo behind the manager's chair is the one who has the Phillies positioned for the postseason. There's Thomson, wide smile, arms stretched and palms out, dapper in a fedora and a suit and tie. Even as road-trip attire has relaxed, the 59-year-old Thomson wears a suit and tie on every trip, a tribute to his father who told him that was how a ballplayer dressed. The Phillies surprised him on a summer road trip to Texas by, well, following suit and dressing to the nines in an homage to their manager.

The self-effacing Canadian clearly won over his players -- and won over 60% of his games since he was hired in June after Joe Girardi was fired and the Phillies were foundering below .500.

Just don't ask Thomson if he thinks he deserves credit for the turnaround.

They have to win just a few more to clinch an NL wild-card spot.

The Phillies' magic number is eight as they open a 10-game road trip Tuesday at Wrigley Field. If the Phillies keep their third wild-card spot, it's off to St. Louis for a best-of-three series. Win that, and it's Games 1 and 2 of the NLDS on the road, with Atlanta or the New York Mets the most likely starting spot. Should the Phillies survive up to 15 straight road games, they will play Game 3 of the NLDS on Oct. 14 at Citizens Bank Park. That's 19 days away.

Thomson is a scoreboard watcher (even in spring training) but playoff talk hasn't really permeated the clubhouse.

"It's more the leadership in the room. It doesn't need to be said as much," Matt Vierling said.

Vierling. Rhys Hoskins and J.T. Realmuto. Jean Segura and Aaron Nola. Zack Wheeler. The cornerstones of the comeback have yet to play a postseason game. Bryce Harper has not played one for the Phillies. Neither has NL home-run leader Kyle Schwarber.

Thomson knows the thrill of winning in October in Philadelphia.

Thomson cut his teeth in baseball over 28 seasons in the New York Yankees organization that included a lengthy stint under Girardi as the bench coach. Thomson laughs when he recalls getting off the train to thousands of Phillies fans booing the Yankees during the 2009 World Series, when Girardi, Thomson and the Yankees beat the Phillies in six games.

The Phillies reached the playoffs from 2007-2011, won the World Series in 2008 and churned through four managers since Charlie Manuel was fired in 2013. None left with a winning record.

Thomson was passed over once before when Girardi was fired by the Yankees in 2017 and the job went to Aaron Boone. Once the Yankees opportunity fizzled, Thomson said he kind of gave up on the idea of managing in the big leagues. He was one of the first arrivals each day at the ballpark as Philadelphia's bench coach -- as early as 9 a.m. for a 7 p.m. game -- and settled into a comfortable role with the Phillies.

"I love sitting in front of my computer just watching tape, watching players, how they move, how they field the ball," Thomson said.

He has the Phillies on plenty of highlight reels over the stretch run.

Thomson is 61-40 -- a record made more impressive with Harper sidelined most of the summer with a broken thumb -- the win total the most for any first-time manager in Philadelphia through 100 games. Dallas Green, who managed the Phillies to the 1980 World Series championship, and Bill Shettsline in 1898 won 57 games.

Thomson, from Sarnia, Ontario, a city on the Michigan border about 200 miles west of Toronto, is the seventh manager born in Canada to manage an MLB team and first since 1934. Thomson is a member of the Canadian baseball Hall of Fame and, thanks to a July series up north against the Blue Jays, the first Canadian to manage in his home country.

He feels at home in Philly. Thomson said there has been no discussion with the front office about stripping the interim from his title next season and making his job permanent. It seems a formality. So, this week, do the playoffs.