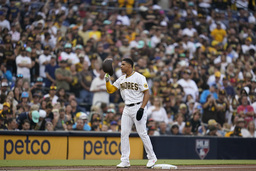 The acquisition of the 23-year-old generational talent in perhaps the biggest deadline deal ever energized the Padres and their long-suffering fans, and there's more to come.

The Colorado Rockies needed it in their first look at the new Padres on Wednesday night.

Soto, acquired from Washington in a massive trade along with switch-hitting first baseman Josh Bell, walked on four pitches in his first at-bat. Machado doubled behind him, Bell also walked and then lesser-known deadline pickup Brandon Drury - acquired from Cincinnati amid a breakout season - crushed a grand slam. The Padres went on to win 9-1.

The group posed together for a Polaroid photo in the dugout after rounding the bases - the signature celebration for the club known as Slam Diego.

The uncertainty over his future began weighing on Soto, who said after Sunday's game against St. Louis: "I just want to get it over with and see what's going to happen. Start over here or wherever I'm at."

That place is San Diego, where the Padres entered Wednesday holding the NL's second wild-card spot while trailing the Los Angeles Dodgers by 11 1/2 games in the NL West.

Soto, one of the game's best young hitters, said he was happy Bell was included in the trade. The two were flown to San Diego on a private jet Tuesday night.

"For me, I never realized I was going to be traded together. I was thinking probably by myself," Soto said. "When I realized I was coming with Josh, we have a great relationship and I was more excited and more pumped because he's coming and I know what kind of guy he is and what he brings to the table. I'm more than excited to share another clubhouse with him."

Soto contributed to the Nationals' first World Series title in 2019 and then hit .351 in 2020 to win the NL batting title. He's in his second straight All-Star season, and now he and Bell have joined a team whose playoff chances vaulted big-time.

Soto said all the conversations with Padres general manager A.J. Preller and his new teammates have been, "Let's win, let's bring the good energy to the clubhouse and the stadium, just come here and try to win. Try to bring my experience from 2019 as a World Series champ to here in San Diego.

"That's what I'm going to do, that's what I have in my mind since I saw the trade yesterday. That's what we're going to try to do, try to make it all the way to the last team standing."

"Yeah, definitely," he said. "This team has everything that it needs to win a World Series."

San Diego last played in the World Series in 1998, when it was swept by the New York Yankees.

Soto is under contract for two seasons beyond this year and said he's not thinking about anything after that.

"I'm just thinking about winning," he said. "I'm just coming to this clubhouse to bring the energy that I have, all the good vibes that I have to bring here, to win."

Soto and Bell are coming from the team with baseball's worst record to one that has vaulted its postseason chances.

Said Bell: "Obviously we pour our hearts and souls into this game no matter where we are. ... But it's a little bit extra fuel in the fire to be here and to be in the hunt and to have a reason to show up a little bit earlier every day to get the work done that we need to get done. I'm definitely pumped to have a new opportunity here."

Soto and Tatis, who's also 23, have known each other since playing together in the Dominican Prospect League.