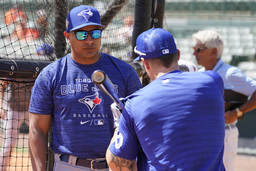 Martinez was discplined by MLB senior vice president Michael Hill for making contact with Eddings and what MLB termed unsportmanlike conduct during the lineup cards exchange before Wednesday's game at the Chicago White Sox.

The 37-year-old Martinez began serving the suspension when the Blue Jays played at Milwaukee on Friday night.

A former minor league infielder, Martinez was hired by Toronto as a minor league coach in 2012 and joined the major league staff for the 2019 season.