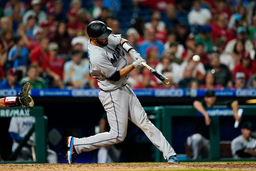 MIAMI (AP) The Miami Marlins beat Jacob Stallings in salary arbitration on Saturday, and the catcher will earn $2.45 million this season rather than his $3.1 million request.

Richard McNeill, Gary Klendellen and Fredric Horowitz made the decision on Stallings, a day after hearing arguments.

Stallings hit .246 last year for Pittsburgh with career bests of eight homers and 53 RBIs, earning $1.3 million. He entered Saturday with a .199 average, two homers and 21 RBIs.

No statistics or evidence from after March 1 are admissible other than contract and salary comparisons. The timing was set when Major League Baseball and the players' association agreed to the deal that ended the lockout.

Arbitration hearings usually are held during the first three weeks of February but were delayed by the lockout.