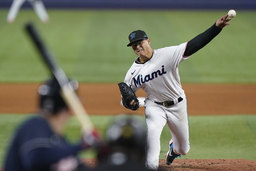 After sweeping the rival Mets at home over the weekend, Atlanta arrived in Miami needing one win or a New York loss to wrap up the division crown and a first-round playoff bye.

The Braves were unable to solve Luzardo or slow De La Cruz - and the Mets were rained out at home against Washington. New York is 1 1/2 games behind Atlanta heading into Tuesday's doubleheader versus the last-place Nationals, while the Braves will play the second of three games at fourth-place Miami.

"You just can't go out and win a baseball game. There are a lot of moving parts in it," Atlanta manager Brian Snitker said. "These are dangerous teams, there are guys out there with talent. It's hard to win a game. We'll go get a good night's sleep, come back and do it again."

Dansby Swanson had two of Atlanta's four hits, all off Luzardo (4-7). Braves sluggers Austin Riley and Matt Olson struck out three times each against the left-hander, who walked one in his first win since Aug. 7.

"It's extremely satisfying," Luzardo said. "Just wanted to go out there and do the same thing I've been doing: give us a chance to win, go long into a game. The result was great and definitely wanted to keep the train going."

It was the fifth time the Braves were shut out this season, and the first time Miami blanked them since Sept. 8, 2020.

De La Cruz also doubled and singled, finishing a triple shy of the cycle for the third time in his last nine starts. Jesus Sanchez doubled twice and singled as Miami snapped an eight-game losing streak to the Braves.

"Hopefully next time I have that opportunity needing a triple, I'll try to hit one out and perhaps the outfielder will dive, miss it and the ball will bounce around," De La Cruz said.

Atlanta starter Bryce Elder, who threw a shutout against Washington in his previous outing, was lifted after giving up four runs in five innings. Elder (2-4) allowed six hits, walked one and struck out five.

"Would have liked to keep it closer than four," he said.

Swanson doubled leading off the sixth before Luzardo fanned Michael Harris II, Riley and Olson. It was Atlanta's final hit, as relievers Jeff Brigham, Bryan Hoeing and Richard Bleier each tossed a perfect inning for Miami.

Run-scoring doubles from De La Cruz and Sanchez in the first gave the Marlins a 2-0 lead.

De La Cruz's two-run shot in the third made it 4-0. The second-year outfielder drove Elder's sinker over the wall in center for his 13th homer this season. He raised his batting average to .390 with five homers and 22 RBIs since being recalled from Triple-A on Sept. 7.

"That's who I am, the player they brought in last year," De La Cruz said. "And that's how I will continue to be the rest of my career."

"Our guys have kept us there and given us chances," Marlins manager Don Mattingly said. "If you look at the whole season, it's been a pretty strong suit. For the most part, they've been pretty solid."

When Elder made his previous start in Miami on Aug. 14, he was a one-day call-up from Triple-A to take the 27th roster spot for the doubleheader. Now, he could figure in Atlanta's postseason plans after his third outing since being recalled a fifth time Sept. 19.

"He's definitely going to be in the conversation," Snitker said. "He's pitched his way into it."

Harris accomplished in September what he had previously done in June and August. The 21-year-old center fielder earned his third NL rookie of the month award. Harris hit .324 and finished with six homers and 19 RBIs in September.

Braves: 2B Ozzie Albies (right pinkie fracture) traveled with the club to Miami, where he will continue his rehab.