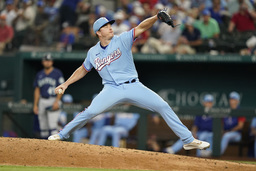 ARLINGTON, Texas (AP) Corey Seager doubled twice and scored twice, including the tiebreaking run in the seventh inning, as the Texas Rangers beat the Seattle Mariners 5-3 on Sunday to win the three-game series.

Josh Sborz (1-0) struck out five of the seven batters he faced in the seventh and eighth innings, including all three in the eighth, and allowed only one walk. The five strikeouts were a career high, and the two innings matched his career-long outing through four seasons.

"He's got closer stuff," Texas manager Chris Woodward said. "That second inning was about as good as you can execute."

The Rangers won two straight over the Mariners after losing nine consecutive games to Seattle.

It was the first series loss for the Mariners to an opponent other than Houston since mid-June. They remain in the second wild-card position in the American League.

Sborz's outing following his first big league start on Friday night against Seattle as an opener, during which he took a liner off his right biceps in his only inning.

"I was fortunate it didn't hit any lower, on any bone," Sborz said. "Today it felt a lot better."

Jose Leclerc pitched a perfect ninth inning for his first save since the delayed opening day in July 2020. After pitching one more game then, Leclerc missed the rest of the season and all of 2021 with multiple arm injuries.

Seager doubled to left field with two outs in the seventh, reached third on a wild pitch by Matt Brash (3-4) and scored on Adolis Garcia's single. Nathaniel Lowe followed with his second double of the game, a ground-rule version to left, off Erik Swanson to score Seager.

The Mariners pulled even 3-all in the sixth when Julio Rodriguez reached on a throwing error by Seager at shortstop, allowing J.P. Crawford to score.

Texas regained the lead 3-2 in the fifth when Seager doubled, advanced to third on a groundout and scored on a wild pitch that bounced in front of the plate.

Mitch Haniger's fifth-inning single that scored Dylan Moore to tie the score at 2 and extend his hitting streak to 11 games. That's three games in late April before he was sidelined 88 games by an ankle injury and eight games since his return on Aug. 6.

Bubba Thompson gave the Rangers a 2-1 lead with a single that scored Lowe and Meibrys Viloria.

Seattle scored first on Sam Haggarty's single through the hole on the left side to bring home Crawford.

Gilbert went into play with a 1.02 ERA against Texas this season in 17 2/3 innings over three previous starts.

A scoring change made Saturday from Thursday's Rangers-White Sox game following a Texas challenge resulted in a new first career hit for Rangers OF Bubba Thompson. His fifth-inning grounder was initially scored an error.

The baseball was saved by assistant clubhouse manager Dave Bales in case the ruling was changed and was presented to Thompson on Saturday.

"I had forgotten about it," Thompson said. "I'll take it."

Lowe has a 20-game on-base streak, longest by a Ranger this season. . C Curt Casali made his Mariners debut, going 0 for 2 with a walk and a strikeout. Casali was acquired Aug. 2 from San Francisco and came off the injured list (right oblique strain) Thursday. . Rangers LHP Matt Moore began three days' paternity leave. Moore was replaced by RHP Yerry Rodriguez, who was recalled from Triple-A Round Rock and hasn't appeared in a big-league game.