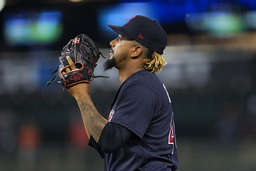 Bieber (7-6) allowed just four singles and a walk while striking out eight. Amed Rosario had three hits, including two doubles, while scoring a run and driving in another.

Bieber has won his last three starts, giving up just three earned runs in 20 innings during that stretch.

"Even tonight, he kind of mentioned to (pitching coach Carl Willis) that he was frustrated trying to find his release point," manager Terry Francona said. "If that's frustration, I hope he's frustrated a lot because I thought he was really good."

"We want to keep it rolling and kind of pass the torch," Bieber said. "We all know what we can do as a clubhouse, as a team, especially when we're playing aggressive on the mound, in the box and on the base paths. We want to put pressure on the opponent and we were able to do that tonight and in the past few games."

Cleveland entered the night trailing first-place Minnesota by one game in the American League Central Division.

Tyler Alexander (2-6) gave up two runs and seven hits in seven innings for Detroit. The Tigers barely avoid getting shut out for the second straight game, as Eric Haase drew a two-out, bases loaded walk against Eli Morgan in the ninth. They added another run on a wild pitch by Emmanuel Clase.

"Our guys are still trying," Detroit manager A.J. Hinch said. "That's a tough task tonight, especially when Bieber is locating his pitches the way he was. They live through their starters and they've got a strong pen. A lot of it is because they can utilize them when they have to late in the game and they're fresh."

Clase then recorded his 25th save by getting Akil Baddoo to ground out.

The Guardians made it 2-0 in the sixth on back-to-back doubles by Steven Kwan and Rosario.

Cleveland tacked on three more runs in the eighth off reliever Will Vest. Gonzalez's two-out double off the right-field wall drove in Kwan and Rosario. Josh Naylor knocked in Gonzalez with a single.

"It was a close game there," Bieber said. "It was nice to break it open in the eighth and let the bullpen come in and shut it down."

Guardians: RHP Aaron Civale (right wrist inflammation) will be activated from the 15-day injured list and start Wednesday's game. Civale threw a four-inning rehab start at Triple-A Columbus on Friday. ... RHP James Karinchak will not make the trip to Toronto for the team's weekend series due to his vaccination status.

Tigers: RHP Beau Brieske (right forearm soreness), who was scheduled to start the series finale on Thursday, will remain on the 15-day IL. He felt discomfort during a bullpen session and was diagnosed with biceps tendonitis. "I wouldn't expect him in the next couple of series," manager A.J. Hinch said. ... OF Austin Meadows (right and left Achilles strains) will begin a rehab stint at Triple-A Toledo on Wednesday. Meadows will remain there 7-10 days before he may be activated.

Tigers: RHP Drew Hutchison (1-5, 4.37 ERA) gave up four runs (two earned) and eight hits in six innings against Tampa Bay in his last start. Hutchison is 1-1 with a 6.85 ERA in six career outings against the Guardians.