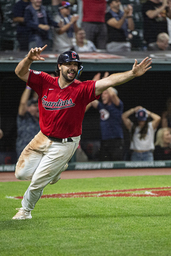 CLEVELAND (AP) Austin Hedges scored on an error by shortstop Jermaine Palacios in the 15th inning and the AL Central-leading Cleveland Guardians beat the Minnesota Twins for the eighth straight time, 7-6 to sweep a day-night doubleheader Saturday.

Amed Rosario, who went 8 for 13 with six RBIs in the twinbill, hit a sharp grounder that Palacios mishandled with two outs. The ball skidded into the outfield, allowing Hedges to score from third and end the 5-hour, 24-minute marathon.

"The mindset is the same every day," Rosario said. "I go one at-bat at a time and control what I can control."

Rosario had four hits in both games of the doubleheader, including a three-run homer in the nightcap. He drove in two runs in the opener, a 5-1 victory by the Guardians behind ace Shane Bieber.

"I was just watching guys go out and do their job, and I was ready to compete when it got to me," McCarty said. "A well-deserved win. We're never out of a game."

Nick Gordon drove in Carlos Correa with a sacrifice fly in the top of the 13th to put the Twins in front 6-5 before Rosario singled home Ernie Clement with two outs in the bottom half.

The Guardians carried a 5-0 lead into the eighth, but the Twins tied the game on Gordon's two-run homer off James Karinchak. Gio Urshela had a two-run single and Gary Sanchez followed with a sacrifice fly off Trevor Stephan to begin the rally.

"Our guys gave everything and left it all out there," Minnesota manager Rocco Baldelli said.

Cleveland starter Konnor Pilkington tossed 5 2/3 no-hit innings before allowing a single to Miranda on his 81st and final pitch.

"Both teams were kind of pigeon-holed because we were out of (position) players," Guardians manager Terry Francona said. "(McCarty) saved our bacon."

In the first game, Bieber allowed one run over eight innings to win his third consecutive start. Jose Ramirez hit a solo homer on his 30th birthday and Owen Miller delivered a two-run double.

"When Shane pitches, it's just a different feel because the innings roll by and it's really fun to watch," Miller said. "With him on the mound, he's about as good as anyone. I'm glad we could get some runs for him."

"I've got to commend the entire offense because when they get us an early lead, it makes it a lot easier for the pitching staff and the defense," Bieber said. "I found myself in cruise control in the middle innings."

Minnesota's Matt Wallner homered in the eighth and went 1 for 3 in his big league debut, with his parents and fiancee in attendance. The 24-year-old was the 39th overall pick in the 2019 amateur draft.

"It was pretty cool to do it against Shane Bieber," Wallner said, smiling. "That was the pitch to hit, so it was pretty fun."

Ramirez hammered a 421-foot drive in the first off Louie Varland (0-1) for his 28th home run and 112th RBI. The All-Star third baseman moved into 11th place in club history with 191 homers.

The Guardians clinched the season tiebreaker against the Twins by winning the opener of the rare five-game series Friday.

Twins: SS Jorge Polanco (left knee inflammation) was removed from the first game of his rehab assignment with Triple-A St. Paul after experiencing soreness Friday against Louisville. Polanco is being examined in Minneapolis.

Guardians: RHP Zach Plesac (broken right hand) threw a bullpen at Progressive Field before the first game, but a decision on his next baseball activity has not been made. Plesac has been on the injured list since Aug. 30.

Twins: RHP Joe Ryan (11-8, 3.83 ERA) threw seven hitless innings against Kansas City on Sept. 13 before being removed after 106 pitches. Jovani Moran lost the combined no-hitter in the ninth, but Minnesota won the game 6-3.

Guardians: RHP Cody Morris (0-1, 2.79 ERA) makes his fourth start since coming off the 60-day IL on Sept. 1. The rookie has worked 9 2/3 total innings, striking out nine and walking eight, while converting from a relief role.