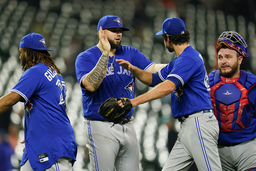 BALTIMORE (AP) Alek Manoah finished this series the way Kevin Gausman started it, by pitching Toronto to a pivotal win.

When those two are on the mound, the Blue Jays look like a complete team - one capable of a deep run this postseason.

Toronto isn't in the playoffs just yet, but by winning three of four at Baltimore, the Blue Jays took a significant step in that direction. Manoah retired 22 of his final 23 hitters in an impressive eight-inning performance on the way to a 4-1 victory Wednesday night.

"This is what we work for," Manoah said. "We want to be in big games, and we want them to matter."

The Blue Jays now have a 4 1/2-game lead on Baltimore for the last wild card in the American League. Manoah (14-7) allowed a run in the first, but the Orioles didn't manage another baserunner until the sixth.

Toronto scored three times in the fifth off Dean Kremer (6-5) and left Camden Yards with its postseason chances looking pretty good - although these two teams have six more games scheduled against each other.

"It's going to take some wins. We need to win series," Orioles manager Brandon Hyde said. "We won five series going into this series and we've got to bounce back and continue to play winning series."

Gausman won the first game of this series, but Toronto split the next two. Mitch White didn't get out of the third inning in a 9-6 loss Tuesday and was sent down to the minors.

Against Manoah, the Orioles took a 1-0 lead on Ryan Mountcastle's RBI double, but the final out of the first started a streak of 14 in a row retired by the All-Star right-hander. He allowed three hits and a walk, striking out five.

"Our offense, I think, wasn't really totally clicking, and you win three out of four against a good team," Toronto interim manager John Schneider said. "So it starts and ends with starting pitching."

Jordan Romano struck out two in a perfect ninth for his 31st save in 35 chances.

Baltimore reinstated Tyler Wells from the injured list and had him pitch the first two innings as basically an opener. He got in a jam in the second and allowed an RBI grounder by Lourdes Gurriel Jr. to tie it.

Kremer retired the Blue Jays in order in the third and fourth, but the fifth started badly for him when the bottom two hitters in Toronto's lineup singled. One out later, Vladimir Guerrero Jr. made it 2-1 with an RBI groundout. After a walk to Bo Bichette, Alejandro Kirk hit a flare to left for a run-scoring single.

Rookie catcher Adley Rutschman then gifted the Blue Jays another run when he tried to pick off Kirk at first and threw wildly for an error.

There were no altercations Wednesday, a night after a bench-clearing dustup between the teams.

"I think this team handled it perfectly," Manoah said. "Didn't let them get us out of our groove, didn't flinch, let them talk their thing. We're going to talk with the bats and with the glove and with the arms and with the ball. And that's exactly what we did."

Guerrero went just 1 for 5 but contributed defensively when he made a behind-the-back toss to Manoah covering first on Rutschman's grounder in the third.

Blue Jays: Gurriel exited with left hamstring discomfort after hustling to first to beat out a potential double play in the second. ... The Blue Jays were without OF Teoscar Hernandez, who went on the paternity list. Toronto recalled RHP Zach Pop and C Gabriel Moreno from Triple-A Buffalo and optioned White to Buffalo.

Orioles: RHP Jordan Lyles, scratched from a start Monday because he was feeling sick, was back at the ballpark. Hyde said he hopes Lyles can pitch this weekend. ... Baltimore optioned RHP Spenser Watkins to Triple-A Norfolk as the corresponding move when Wells was activated.

Both teams have Thursday off. Toronto heads to Texas to face the Rangers on Friday night. Ross Stripling (7-4) starts that game for the Blue Jays.

The Orioles host a three-game series against Boston. Austin Voth (4-2) takes the mound in the opener for Baltimore against Brayan Bello (1-4).