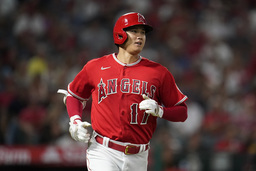 ANAHEIM, Calif. (AP) Andrew Velazquez scored on Magneuris Sierra's bunt single in the 10th inning and the Los Angeles Angels secured their first winning homestand since early May with a 5-4 victory over the Detroit Tigers on Tuesday night.

Taylor Ward scored the tying run moments earlier on a throwing error to the plate by shortstop Javier Baez, who had singled home Kody Clemens with the Tigers' go-ahead run in the top of the 10th.

Sierra then laid down a safety squeeze bunt along the first base line, and Andrew Chafin (1-3) couldn't field it cleanly before Velazquez slid home to secure the Angels' eighth victory in 11 games.

"I just looked for the opportunity to put the ball in play," Sierra said. "I felt so happy to celebrate with my teammates."

Los Angeles had endured six straight losing homestands before going 5-3 on this stand ahead of Wednesday's finale.

Angels interim manager Phil Nevin said he didn't hesitate to flash the bunt sign to Sierra because the veteran still practices his bunting daily, even though he has started just two games in the last two weeks for Los Angeles.

Trout saw Sierra's bunting work several hours before Tuesday's game - and he wasn't surprised when it paid off.

"Preparing yourself for the moment is big," Trout said. "When he got the sign, you prepare for big moments, and you get great results."

Baez scored the Tigers' first run and added two RBI groundouts for the Tigers, who have lost four straight and seven of eight.

Baez singled to right on a two-out, two-strike pitch from Ryan Tepera (4-2) in the 10th, but he couldn't make the play in the bottom half after he fielded Velazquez's grounder with the infield pulled in.

Eduardo Rodriguez yielded three homers and four hits in his first two innings, but just one hit after that while going seven innings in his longest start since joining Detroit on a $77 million contract.

Mike Mayers pitched 5 2/3 innings of four-hit ball for the Angels, with the converted reliever yielding two runs in his longest appearance of the season.

After homering against Houston last Sunday and against the Tigers on Monday, Trout connected again on the first pitch he saw from Rodriguez, hitting it 414 feet into the ficus trees beyond center field. Ford and Adell then homered to right field in the second, with Ford getting his third homer of the homestand and Adell ending a 2-for-23 slump.

Baez singled in the fourth and scored on a two-out single by Spencer Torkelson. The touted prospect hadn't driven in a run since July 12, shortly before he was sent back to the minors after a rough start to his rookie season.

Baez drove in Willi Castro with a sixth-inning groundout, chasing Mayers. Baez then drove in Castro again in the eighth with the tying run on another groundout.

Tigers: Rookie OF Riley Greene sat out with a sore wrist from a play in Monday night's game. Greene also won't play Wednesday, but it was a scheduled day off for him.

Angels: Anthony Rendon might have a chance to play again this season after all. The $245 million third baseman had wrist surgery in June and was ruled out for the year, but he is taking grounders and hitting in the cage. If Rendon can get healthy before October, he could at least serve his pending five-game suspension for his role in the Halos' team brawl with Seattle in late June. ... RHP Archie Bradley is scheduled for his first bullpen session Wednesday since the reliever fractured his elbow while falling off the dugout railing during the brawl. He has pitched only 18 2/3 innings this season.

The California heat wave could be brutal when Patrick Sandoval (5-9, 3.02 ERA) takes the mound for Los Angeles against Drew Hutchison (2-7, 4.06) in the series finale at 1 p.m. Pacific time, when the temperature is expected to be near 100 degrees.