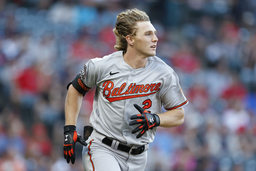 CLEVELAND (AP) Baltimore Orioles manager Brandon Hyde said Gunnar Henderson might need a chinstrap or some Velcro to keep his helmet in place.

Judging by Henderson's major league debut, that might be a good idea.

Henderson lost his batting helmet after connecting on a drive that traveled an estimated 429 feet, and the Baltimore Orioles beat the Cleveland Guardians 4-0 on Wednesday night.

Henderson, called up from Triple-A Norfolk earlier in the day, homered to lead off the fourth inning against Triston McKenzie. The game's No. 1 prospect according to Baseball America drove a 2-2 pitch to right-center field for his first big league hit. He singled in the ninth and went 2-for-4.

"That ball was hit," Hyde said. "It was loud. A no-doubter off the bat. Our dugout exploded. The helmet didn't get out of the batter's box."

Henderson's helmet fell off after as he attempted to leave the box. He looked to the sky after crossing the plate and was greeted by teammates as he headed for the dugout.

Henderson said losing his helmet is a common occurrence.

"Every time I swing it comes off," he said. "We tried them all. That was the closest one. I guess I got too much hair going."

Baltimore is hoping for a boost from the 21-year-old Henderson as it chases an AL wild-card spot. The Orioles moved within two games of division rival Toronto in the playoff race.

Ramon Urias hit a two-run homer in the eighth and had three RBIs while Jordan Lyles (10-9) held the Guardians to four hits in 6 2/3 scoreless innings.

Catcher Adley Rutschman, another rookie who has helped vault the Orioles into contention, hugged Henderson on the top step of the dugout and placed the Orioles' home run chain around Henderson's neck.

"He just looked at me," Henderson said. "It was kind of a surreal moment. I've been able to come up through the minor leagues with him and watch his career. To be able to do that up here with him was pretty awesome."

Henderson's parents, girlfriend and other relatives exchanged hugs and high-fives as he rounded the bases.

Henderson was told of his promotion following Norfolk's game on Tuesday night, which led to day of travel and adjusting to his new surroundings.

"I didn't feel any nerves today," he said. "It could have been I got about 45 minutes' sleep last night."

McKenzie (9-11) allowed two runs in five innings, but threw 97 pitches - and was angry about the one he threw to the rookie.

"That's been something that's kind of been a reoccurring case in some of my most recent starts and I think it just kind of ticked me off a little bit," he said.

Henderson primarily played shortstop in the minors, but the he was moved around the infield at Norfolk to increase his versatility. He played third base and batted sixth Wednesday.

Cleveland had a 1 1/2-game lead over Minnesota in the AL Central going into Wednesday.

Lyles and two Orioles relievers combined on a five-hitter. Cleveland loaded the bases with two outs in the fourth, but Luke Maile bounced into a fielder's choice.

The Orioles forced McKenzie to throw 31 pitches in the third. Anthony Santander checked his swing on a 3-2 pitch to load the bases with two outs. McKenzie walked Urias on four pitches to force in a run.

THE FUTURE IS HERE

A year after losing 110 games, the Orioles have been ahead of schedule in their rebuild. Rutschman, the top pick in the 2019 draft, arrived in the majors earlier this season. Henderson was a second-round draft pick that same year. Henderson hit 11 home runs in 65 games at Triple-A Norfolk.

"It's fun to see these guys graduate to the big leagues, and what a great experience for them to be playing in their first year in these kinds of environments," Hyde said.

Rutschman made his major league debut on May 21.

"We saw Rutschman the first time there, he wasn't doing real well," Cleveland manager Terry Francona said. "Now you look at him, if you throw that fastball where you're not supposed to, he's ready to hit it. He's hitting second in the lineup and he's a rookie catcher. That speaks volumes about him."

The Orioles optioned INF Tyler Nevin to Triple-A Norfolk and designated RHP Denyi Reyes for assignment. 1B Jesus Aguilar and LHP DL Hall will be added Thursday when rosters can be expanded to 28 players.

The Guardians will call up RHP Cody Morris from Triple-A Columbus on Thursday.

The teams play the final game of the series Thursday night. Orioles starter Kyle Bradish (2-5, 5.63 ERA) pitched a career-high eight scoreless innings in a win over Houston in his last start. RHP Shane Bieber (8-7, 3.10) held Seattle to one earned run over seven innings in his last start.