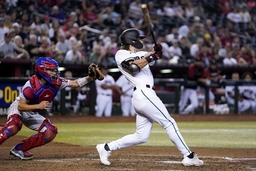 PHOENIX (AP) Zac Gallen let his scoreless streak weigh on him during a start in Kansas City last week, to the point it was nearly all he could think about early in the game.

His mind freed up, Gallen kept his scoreless streak going against Philadelphia, even on a night when he didn't have his best stuff.

Gallen stretched his scoreless streak to 34 1/3 innings with another dominating performance, Jake McCarthy homered and had five RBIs, and the Arizona Diamondbacks blasted the Philadelphia Phillies 12-3 on Tuesday night.

"Try not to let it consume me I think is the biggest thing," Gallen said. "It's probably what I was most proud of tonight. (It) didn't really creep into my mind at all. Just kind of was like it's a good lineup, if they get me they get me, just make pitches and win the baseball game."

He did and so did the Diamondbacks.

Gallen (10-2) had the Phillies off-balance all night, allowing two hits with seven strikeouts in seven innings.

The Diamondbacks set two team records in the series opener Monday night, scoring six runs in consecutive innings to overcome a 7-0 deficit and beat the Phillies 13-7.

Arizona rewarded manager Torey Lovullo with a contract extension through 2023 on Tuesday and kept hitting.

The Diamondbacks knocked Aaron Nola (9-11) for five runs in the second inning and McCarthy put them up 8-0 with a towering, three-run homer in the fourth. Rookie Corbin Carroll added a two-run double in the eighth inning off infielder Nick Maton in his second big league game.

Arizona had a season-high 17 hits for its seventh straight win over the Phillies.

"The offense seemed to be clicking on all cylinders," Lovullo said. "You bang out what 17 heads, just really quality approaches. Guys are patient, hunting for the pitch through the entire out bat that they want to drive. We're using an all-field approach. It's just this it came together very nicely today."

Gallen has been dominant for the better part of two months and entered Tuesday's game with the fifth-longest scoreless-innings streak in Diamondbacks' history.

The right-hander moved up three places in one night with a mix of mid-90s fastballs and sharp-breaking curveballs. He is now behind only Brandon Webb's 42-inning scoreless streak in 2007.

"He continues to stay locked in and just pound in the zone with with a really aggressive fastball," Lovullo said "He started the land is curveball maybe from the second inning on and once he got that going and threw some cutters, he just became very dominant."

Philadelphia's Brandon Marsh hit a three-run homer off Noe Ramirez in the eighth.

Lovullo typically doesn't pick up a runner until he's rounding third toward home.

Carroll's speed changed that in the second inning.

The rookie showed up some of his speed and hit a two-run double in his big league debut Monday night. Carroll looked like he was moving in fast forward mode in the second inning, traveling nearly 31 feet per second to score easily from first on Alek Thomas' double.

"I was watching him the entire time," Lovullo said.

Nola threw a complete game shutout in a win over the Reds his last start.

Phillies: RHP Zach Eflin (right knee) threw a short bullpen on Tuesday and could throw another later this week in San Francisco. He will likely be slotted as a reliever when he's reinstated.