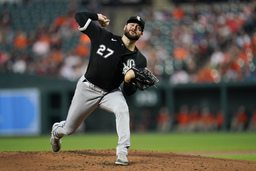 BALTIMORE (AP) On a night when the Chicago White Sox again gave themselves plenty of RBI opportunities, nobody had more than Gavin Sheets.

Three times, Sheets went to the plate with the bases loaded Wednesday. He came through on two of those plate appearances, driving in three runs in Chicago's 5-3 win over the Baltimore Orioles.

"It was funny. I think the ball I hit the best was the out - the last at-bat," Sheets said. "That's baseball. Just try to put good at-bats together and get the job done in that situation."

Lucas Giolito pitched impressively into the seventh inning and Yoan Moncada pulled off a slick double play for the White Sox. Chicago left 14 men on base after stranding 13 the night before. They managed to split the two games despite all those missed chances.

Giolito (10-7) allowed one run and four hits in 6 1/3 innings, rebounding from last week's effort in which he gave up seven runs in three innings against Houston. Then Kendall Graveman was helped out of a bases-loaded jam in the seventh thanks to Moncada's play at third.

With the bases loaded and one out and Chicago up 3-1, Baltimore's Jorge Mateo hit a bouncer right at the base. Moncada lunged to his right to snag it, and while doing so tagged third with his bare hand and then his left foot. Then he threw to first to complete the twin killing.

"Everything about it was outstanding, especially the significance," White Sox manager Tony La Russa said. "He goes to his right as good as anybody in the league. He makes that awkward throw as good as anybody."

The White Sox remained four games behind first-place Cleveland in the AL Central. Austin Hays homered for the Orioles, who stayed 2 1/2 back of the last wild card in the American League.

The White Sox loaded the bases with one out in the first against Spenser Watkins (4-4), and Sheets came through with a two-run single. Baltimore scored a run in the fourth when Adley Rutschman hit a leadoff double and eventually scored on a groundout by Ryan Mountcastle.

In the seventh, Chicago again loaded the bases with one out. Jose Abreu struck out, but Sheets beat out a roller to the shortstop for an infield single and a 3-1 lead.

The White Sox added another two runs in the eighth on a wild pitch and an RBI single by AJ Pollock. Sheets came up with the bases loaded a third time that inning but lined out to right for the third out.

The White Sox have had a frustrating season, but there's still time for them to make a run, especially if their starting pitching clicks. Dylan Cease and Johnny Cueto have been sharp, but Michael Kopech just went on the injured list and Giolito and Lance Lynn have ERAs over 5.00.

If Giolito's effort Wednesday was a sign of things to come, it could give Chicago a real boost down the stretch.

Sheets became the third player this season to bat with the bases loaded three times in a game, according to Sportradar. Cal Raleigh of Seattle did it July 4 at San Diego, and Wilmer Flores of San Francisco did it May 7 against St. Louis.

The Orioles claimed RHP Phoenix Sanders off waivers from the Tampa Bay Rays.

White Sox: OF Eloy Jimenez didn't play after being hit on the left elbow by a pitch Tuesday.

This version has been corrected to reflect that Sheets' infield single was in the seventh inning.