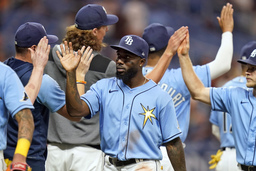 Jeffrey Springs pitched effectively into the sixth inning for the Rays, who have won eight of 10 and moved a half-game ahead of Toronto and Seattle in the AL wild-card race.

Arozarena hit his 17th homer of the season off Tucker Davidson (2-4) after Mike Trout had tied the game in the fifth with an RBI single.

"All I was trying to do is make good contact," Arozarena said through a translator. "As everyone knows, all I try to do is hit the ball hard a lot of the time, and I was able to to do it on that one. It was a beneficial run for us because it ended up giving us the lead."

And as it turned out, the game.

A hot Arozarena was a familiar sight to interim Angels manager Phil Nevin, who watched some of Arozarena's record-setting 2020 postseason (10 home runs, 29 hits) as a New York Yankees coach.

"He's swinging the bat good. and believe me, I've seen it a lot," Nevin said. "(I have) nightmares from a couple of years ago. ... He goes on these runs at the end of the year and he's pretty tough to pitch to."

Arozarena has five home runs and 18 RBIs in 18 games in August.

Springs (6-3) gave up one run on five hits in 5 2/3 innings, striking out seven. Three of the Angels' hits came in the fifth inning, including Trout's two-out single.

Shawn Armstrong pitched the ninth to earn his first save for the Rays.

Davidson gave up two runs on six hits in five innings for the Angels. It was the best of his three starts for the Angels since they acquired him from Atlanta on Aug. 2, but the mistake to Arozarena was costly.

"It was supposed to be a fastball in and it just ran out over the plate," Davidson said. "I threw one there earlier and he missed it. He didn't miss that one."

Losing for the sixth time in seven games, Los Angeles struck out 12 times and left nine men on base.

Shohei Ohtani fanned in a pinch-hit appearance with two men on in the sixth. The AL MVP and two-way star left his mound start at Detroit on Sunday after four innings because of a stomach virus.

Rays: RHP Nick Anderson (right elbow surgery) was reinstated from the 60-day injured list and optioned to Triple-A Durham. ... RHP Phoenix Sanders was designated for assignment to make room for Anderson on the 40-man roster.

Videos taken by both teams confirmed that Trout's RBI single actually came off the bat twice.