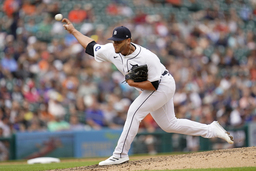 Alexander (3-7) allowed three runs on seven hits and a walk in six innings, notching his first win in eight starts this season. Detroit's bullpen then pitched three hitless innings, with Gregory Soto throwing the ninth for his 23rd save.

"I liked the way I finished, especially the way I started," said Alexander, who allowed one run in each of the first three innings. "I couldn't get the ball inside like I wanted. I didn't make any mechanical adjustments - I just made better pitches in the last three innings."

The Tigers' bullpen has been strong all season, but the starting pitching leads the American League with a 3.15 ERA since the All-Star break. That hasn't been enough to overcome the team's lack of offense - Detroit is 9-21 in that stretch - but manager A.J. Hinch is encouraged.

"We're at a point where we expect a good start," he said. "and we expect to win if we give our bullpen a lead."

"I was just having a hard time getting settled in," said Detmers, who was 2-0 with a 1.50 ERA in his past six starts. "Nothing felt right coming out of my hand, and I'm not sure why. I'll have to go back and watch the video."

Angels manager Phil Nevin wasn't worried about the loss of velocity on Detmers' fastball, saying "his slider was right where we expect it ... He said he felt fine, so it is more than likely a mechanical issue."

Unlike Friday's game, which the Angels won 1-0 in two hours and 15 minutes, hits and runs were common for both teams in the early innings.

Shohei Ohtani led off the game with a double and scored on Luis Rengifo's base hit, and the Angels took a 2-0 lead in the second on Andrew Velazquez's homer.

The Tigers scored twice on five hits and a bases-loaded walk in the second inning, and could have had more if right fielder Taylor Ward hadn't thrown Jonathan Schoop out at the plate. Schoop injured his right ankle on the slide and was replaced by Kody Clemens.

"It's an ankle sprain, and he's day-to-day," Hinch said of Schoop. "We haven't scored a lot lately, and (third-base coach) Ramon (Santiago) was probably trying to be aggressive, especially with a wet ball."

Adell put Los Angeles up 3-2 with a sacrifice fly in the top of the third, but Jeimer Candelario had one of his own in the bottom of the inning.

Victor Reyes gave the Tigers a 4-3 lead with an RBI single off reliever Jaime Barra in the fifth.

The Tigers had a runner on second with two out in the third inning when Tucker Barnhart hit a groundball to Velazquez at short. Instead of making the easy throw to first, Velazquez threw to a startled Rengifo at third. Luckily for Velazquez, Mike Trout prevented any further damage with a leaping catch of a line drive.

"He said he knew how many outs there were, but the runner cut in front of him and he lost his focus for a second," Nevin said. "It was a mistake, but Mike bailed him out."

Technical problems knocked out the Comerica Park sound system for a couple of innings, leaving the game without walk-up music, batter announcements or big-screen entertainment between innings. Normal sounds resumed in the fifth inning.

The teams are scheduled to finish their weekend series Sunday, although rain is in the forecast all day. Ohtani (10-7, 2.69 ERA) will face Eduardo Rodriguez (1-3, 4.38), who was reinstated from the restricted list Friday after being away from the team since early June to deal with family problems.