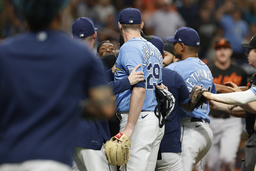 ST. PETERSBURG, Fla. (AP) All-Star Shane McClanahan stopped a two-start losing streak, working six solid innings as the Tampa Bay Rays moved back in front of the Baltimore Orioles in the AL wild-card race with an 8-2 victory on Saturday.

The benches and bullpens briefly emptied after Rays reliever Pete Fairbanks struck out Robinson Chirinos to end the eighth. Fairbanks was unhappy earlier in the at-bat when Chirinos was granted a late timeout, and he said something to the Orioles catcher when leaving the mound. Chirinos spun around and headed toward the pitcher.

"There was a late time call, I took offense," Fairbanks said. "Apparently I misunderstood who had called time, where it came from ... apparently it was the umpire, not Chirinos. Guys know I can be a little fiery, so I think that might of caused some things today."

"He said somethings to me. I said some things to him," Fairbanks added. "I thought it was a fairly normal exchange of talking. I didn't think that they were going to empty that fast. I did not think that what was said back and forth between us warranted everybody sprinting out there, but I'm not the one who took offense in the dugout."

Chirinos said the timeout call was not his fault because it was granted.

"I guess he thought it was my fault," Chirinos said. "And then we lost that game, so doesn't matter. I don't care about that guy."

Baltimore's Ryan Mountcastle was hit by a pitch from former Oriole Jimmy Yacabonis with two outs in the ninth. It appeared to be unintentional and tempers remained calm.

Orioles manager Brandon Hyde said Mountcastle, who had his left hand wrapped postgame, was OK "as of right now."

"Hopefully everything is going to be OK," Hyde said.

McClanahan (11-5) gave up two runs, seven hits and three walks, and had five strikeouts to help the Rays improve to 8-12 since the All-Star break.

"I didn't have my best stuff again tonight but those guys picked me up," McClanahan said.

Jose Siri had three hits and scored three runs, including on Taylor Walls' two-run homer in the eighth.

Hall was optioned to Triple-A Norfolk after the game so he could work on becoming a reliever to help the Orioles down the stretch.

The Orioles lost for the third time in 11 games, falling one-half game behind Tampa Bay after Friday's win put them ahead of the Rays in the AL East and wild-card standings. The three-game series concludes Sunday.

Orioles shortstop Jorge Mateo, coming off a 5-for-5 performance Friday night, singled in his first at-bat and finished 1 for 3 with a walk.

Hall walked his first batter, Yu Chang, on four pitches in the first.

Chang scored on Isaac Paredes' grounder to make it 1-0. Paredes remained at the plate after it appeared the ball deflected off his leg, but the ball was not called foul. Orioles third baseman Ramon Urias fielded the ball and momentarily held onto it before throwing to first.

Hall struck out the side in the second

"I think it was just a little quick for him, but I thought he showed flashes of what he's going to be in that second inning where he had electric stuff," Hyde said.

In the third, Randy Arozarena had an RBI double, Paredes hit a run-scoring double and Francisco Mejia drove in a run with a single - all with two outs.

Arozarena has 35 RBIs in 36 games against Baltimore.

Tampa Bay went ahead 5-2 in the fourth when Siri singled, stole second and third, and crossed the plate on Chang's sacrifice fly.

Chang knocked in Siri to make it 6-2 with a two-out single in the sixth.

Baltimore took a 2-1 lead in the second on RBI singles by Rougned Odor and Chirinos. Mountcastle lined out to short with the bases loaded and two outs.