Minus injured Anderson, Chisox fall to Pratto, KC in Game 1 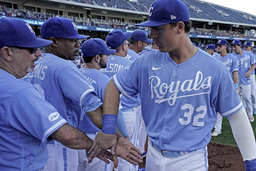 Anderson is expected to miss six weeks with a tear in the middle finger of his left hand. He was put on the 10-day injured list betwen games of the twinbill.

Anderson was injured on a check swing during his last at-bat on Saturday night at Texas. He will have surgery on Thursday in Chicago.

"Huge blow. He's one of our All-Stars and one of our leaders," losing pitcher Lance Lynn said.

Anderson, who is hitting .301 for the playoff-contending White Sox, didn't play while finishing up a two-game suspension for making contact with an umpire.

Brady Singer (5-4) allowed one run on five hits in 7 1/3 innings. He struck out six without walking anyone.

Jose Cuas picked up his first career save.

Josh Harrison hit a solo homer in the Chicago third. Pasquantino homered in the bottom half.

The White Sox threatened in the sixth, getting two-out singles by Luis Robert and Eloy Jimenez. But Singer got Jose Abreu to line out to end the threat.

Yoan Moncada had a sacrifice fly in the ninth for the White Sox.

Chicago: RHP Davis Martin was recalled from Triple-A Charlotte to serve as the 27th man in the doubleheader.

Kansas City: RHP Jonathan Heasley was recalled as the 27th man for the doubleheader. He was the scheduled starter for the second game of the doubleheader. . RHP Taylor Clarke was placed on 15-day injured list (retroactive to Aug. 8) with a left oblique strain. He was replaced on the roster by Cuas, who was recalled from Triple-A Omaha.

The White Sox and Royals will continue their four-game series Wednesday night. RHP Johnny Cueto (4-5, 2.91 ERA) will start for Chicago. LHP Kris Bubic (2-6, 5.27 ERA) will get the start for the Royals.