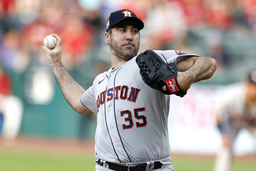 Verlander (15-3), making his comeback from Tommy John surgery, extended his winning streak to seven starts and moved into a tie with Herb Pennock for 55th place all-time with 241 victories. He gave up two hits, both singles, and struck out five.

"It's fun to be behind the plate for him," Maldonado said. "Watching his preparation between games and his execution on the mound, that's what future Hall of Famers do. I think he was born that way."

In addition to leading the majors in wins, Verlander is first with a 1.73 ERA. The right-hander is 11-16 in his career at Progressive Field, where his 5.17 ERA is the highest of any ballpark that he has pitched in more than twice.

"Is it still over 5.00? Well, then I've still got some demons to exorcize here," Verlander quipped. "These guys tormented me for a while. I'm not going to say that was something I focused on, but it was definitely on my mind."

Verlander also triggered his $25 million player option for 2023 by reaching 130 innings. The 39-year-old will earn the same amount this season under the new contract that he signed last winter.

"I wanted a player option and I thought that was more than a fair ask because they're going out on a limb paying an old guy," Verlander said. "Because if I didn't throw 130, then I didn't earn what I made this year anyway.

"Crossing that threshold puts me in a good spot, but that isn't something I'm thinking about now at all."

Will Smith, Ryne Stanek and Phil Maton completed the three-hitter, helping Houston move within 1 1/2 games of the idle Yankees for the best record in the AL.

McCormick gave the Astros a 2-0 lead with run-scoring singles in the third and fifth off Cleveland starter Zach Plesac (2-10). Maldonado added a two-run double in the fifth against Nick Sandlin to make it 4-0.

McCormick and Maldonado struck again in the seventh with solo homers, the 11th of the season for both, off Kirk McCarty. McCormick equaled his career high with three hits on an evening when Houston left eight runners on base over the first three innings.

"I didn't see them square up a ton of balls, but there was a ton of traffic right from the get-go," Guardians manager Terry Francona said. "And Verlander was as advertised."

Cleveland entered the day one game behind AL Central leader Minnesota and one game out of the final wild-card spot. Steven Kwan, Josh Naylor and Austin Hedges accounted for its hits in the loss.

Kwan matched Boston's J.D. Martinez for the longest hitting streak in the AL this year at 18 games. It also is the longest run by a rookie since Pittsburgh's Ke'Bryan Hayes had a 19-gamer in 2020-2021.

Plesac remained winless since June 5 in Baltimore, allowing four runs, seven hits and five walks in 4 1/3 innings. The right-hander is 0-6 in his last 10 starts and has dropped all five of his decisions in night games.

"I'm being tested right now, it's just a weird time," Plesac said. "I'm never going to back down from it and will get out of this funk of unluckiness or whatever it is. It seems like I can't catch a break."

The Astros picked up three significant veterans in 1B Trey Mancini, C Christian Vazquez and LHP Will Smith before the MLB trade deadline earlier this week, allowing manager Dusty Baker to take a deep breath.

"It feels fun, actually, to be done with that," Baker said. "We're in the dog days of the season, but this year, it seems like the dog showed up a little early."

Vazquez ranks third in the AL with 74 starts behind the plate, the first 73 with Boston.

"Going to a new team is a difficult adjustment for catchers, which is where Vazquez is now," Baker said. "You have to learn the philosophy of the pitching coach, how to talk to pitchers, and when to call timeout to calm a guy down. It's not easy."

Astros: OF Aledmys Diaz (left ring finger) was hurt in the eighth inning when he collided with center fielder Jake Meyers on a fly ball to left-center by Cleveland's Austin Hedges. Diaz was undergoing medical tests following the game.

Guardians: RHP Aaron Civale (right wrist sprain), who has been on the 15-day injured list since July 14, will make a rehab start Friday for Triple-A Columbus against Rochester. Francona said the goal for Civale is to pitch four innings.

Astros: LHP Framber Valdez (9-4, 2.80 ERA) has earned the win in all three of his career appearances against Cleveland, posting a 2.81 ERA over two starts and one relief outing.

Guardians: RHP Hunter Gaddis will be recalled from Triple-A Columbus for his major league debut. Gaddis is 1-0 with a 2.70 ERA since his promotion from Double-A Akron.