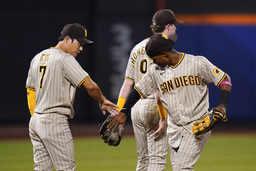 NEW YORK (AP) Manny Machado hit a two-run homer in the sixth inning off Chris Bassitt and the San Diego Padres hung on for a 2-1 victory over the New York Mets on Saturday night.

Taylor Rogers allowed a bloop RBI single to J.D. Davis in the ninth before retiring Tomas Nido on a popup with runners at the corners for his major league-leading 28th save in 33 opportunities.

New York's lead in the NL East is down to a half-game over the defending World Series champion Braves, its smallest since April 12. The Mets had a 10 1/2-game cushion on June 1.

San Diego was held without a hit for 4 1/3 innings by Bassitt (7-7) until Eric Hosmer had a clean single to right field.

Two batters after Jurickson Profar singled in the sixth, Machado made it 2-0 when he drove a 79 mph slider over the left-field fence. The decisive swing came after Bassitt froze Machado with a two-strike pitch that appeared to be in the zone for an inning-ending strikeout, but the right-hander didn't get the call.

While he was disappointed in not getting the call from plate umpire Jim Wolf, Bassitt acknowledged he needed to execute better on his slider to Machado.

"It's part of the game," Bassitt said. "It's OK that he missed it. I've just got to make a much better pitch the pitch after that. That was a terrible pitch."

Machado's 16th homer helped San Diego win for the fourth time in five games. The star third baseman had been hitless in his previous 11 at-bats before connecting. His batting average had dropped under .300 for the first time since April 13 following an 0-for-4 showing Friday.

"That swing won us the game, so thank you Manny for being Manny," Padres starter Blake Snell said.

Snell (2-5) dodged trouble and allowed four hits in five scoreless innings. The left-hander struck out five and walked two while throwing 57 of 85 pitches for strikes.

"He was under control the whole time," Machado said. "You've got to remember he's got really good stuff - really good stuff - and a lot of hitters don't want to be stepping up there when they're facing a Cy Young winner. That's what we're going to need in the second half."

Nabil Crismett ended the sixth by getting Mark Canha on a double play. Adrian Morejon struck out the side in the seventh and fanned Brandon Nimmo for the first out of the eighth.

The Mets have lost three straight for the second time this year and they were nearly shut out for the sixth time. They've managed only 10 runs in their last five games - two in dropping the first two games of the series to San Diego.

Bassitt allowed two runs and four hits in seven innings. He tied a career high by striking out 11 and got his fourth career double-digit strikeout game and first since May 27, 2021, against the Angels.

New York put the leadoff man on six times but went 1 for 9 with runners in scoring position.

Snell got Luis Guillorme to bounce into a double play to end the second and stranded Davis at third by striking out Starling Marte in the third. Snell also stranded Pete Alonso at second in the fourth and struck out Marte for the third time to strand runners at first and third in the fifth.

"Just getting ahead, staying ahead," Snell said. "I've got good stuff. If I can get ahead and stay ahead it's going to be hard for them to have comfortable swings."

San Diego CF Trent Grisham was involved in a scary collision with Bassitt at first base in the seventh.

Grisham hit a grounder to first and Bassitt raced over to cover. Grisham raced down the line and tumbled hard to the ground when his left foot knocked Bassitt's right cleat off.

Grisham played defense in the seventh but was lifted in the eighth for Esteury Ruiz.

Padres manager Bob Melvin said Grisham's back locked up and he might get Sunday night off.

Luke Voit engaged in a little cat-and-mouse game with Bassitt in the fifth. He stepped out of the batter's box four times, but the at-bat ended with Voit whiffing on a curveball.

Padres: Rookie INF CJ Abrams (biceps soreness) was a late scratch from the lineup. He was originally slated to play shortstop. . LHP Drew Pomeranz, recovering from flexor tendon surgery that's sidelined him all season, threw 19 pitches in a simulated game. . OF Wil Myers (right knee inflammation) went 1 for 4 in a rehab game at Triple-A El Paso on Friday. He is slated to play two more games there before being re-evaluated.

Mets: RHP Trevor May, out since May 3 because of right triceps inflammation, will throw one inning in a rehab appearance for Double-A Binghamton on Sunday.