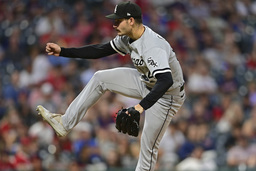 CLEVELAND (AP) Dylan Cease struck out nine over 5 2/3 innings in his first start since being left off the AL All-Star team, and the Chicago White Sox beat the Cleveland Guardians 7-0 on Tuesday night for a doubleheader split.

Jose Abreu, Luis Robert and Josh Harrison homered for Chicago, which had dropped four of six before its sorely needed victory in the nightcap. The White Sox won in Cleveland for the first time in five tries this season.

Cease (8-4) allowed five hits while continuing his bid to become an injury replacement for the July 19 Midsummer Classic at Dodger Stadium. The right-hander has not allowed more than one earned run in nine straight starts, posting a 0.53 ERA over his last 51 innings.

"Beating a Central division opponent is the biggest thing, but I definitely want to keep adding to what I've been doing," Cease said, referring to his All-Star Game candidacy. "Every game is super important."

In the opener, Shane Bieber tossed a three-hitter for his first complete game of the season, leading Cleveland to a 4-1 victory. Jose Ramirez and Amed Rosario each drove in two runs.

Abreu sparked Chicago in the second game with a two-run homer in the first against Konnor Pilkington (1-2). Harrison added a solo shot in the second.

Robert curled a three-run drive off Bryan Shaw in the ninth just inside the foul pole in right.

"I knew I had made good contact, but personally, I thought it would be foul, so it was a good one," said Robert, who had three hits.

"It was a long day," White Sox manager Tony La Russa said. "The pressure was on us in the second game, so we'll enjoy it."

Bieber (4-5) struck out seven and walked none in just the 17th complete game in the major leagues in 2022. The righty was 0-2 in six starts since beating Baltimore on June 3, the longest winless streak of his career.

The 2020 American League Cy Young Award winner carried a one-hit shutout into the seventh en route to his first complete game since Aug. 4, 2019. Bieber only needed 95 pitches to wrap up the 2-hour, 9-minute ballgame.

"Yeah, I enjoyed that," Bieber said, smiling. "I was able to go out there and be efficient and get through nine. I feel really good right now, so I've just got to keep rolling and keep building off the last one."

It was the fourth complete game of Bieber's big league career and the first by a Cleveland pitcher since Aaron Civale's five-hitter at Pittsburgh on Aug. 19, 2020.

"Shane had a good work week and was in control," Guardians manager Terry Francona said. "When you look up at nine innings and under 100 pitches, it means a guy is really pitching."

Rosario delivered RBI doubles in the third and fifth off Davis Martin (1-3), while Ramirez had a two-run single in the third. Ramirez, selected for his fourth All-Star Game, leads the AL with 68 RBIs.

"It was pretty cool going up against Bieber," said Martin, who worked a season-high six innings. "His arsenal is very similar to mine."

The Guardians played their league-high eighth doubleheader, seven of them at Progressive Field. All four of Chicago's doubleheaders have taken place on the road.

Guardians designated hitter Franmil Reyes fouled a pitch off his right ear in the opener, but played all 18 innings. The ball ricocheted off the dirt and struck Reyes below his helmet, giving him a small cut.

Martin was hit between his right shoulder and biceps by an Andres Gimenez liner, leaving the rookie with a baseball-shaped bruise that featured stitching marks on his pitching arm.

"Davis shook it right off, said `I've got this,' and stayed in the game," La Russa said. "He was amazing."

White Sox: C Yasmani Grandal (back spasms) has shifted his rehab assignment from Double-A Birmingham to Triple-A Charlotte. Grandal, who was placed on the injured list on June 13, had a .692 on-base percentage in three games with the Barons.

Guardians: OF Oscar Gonzalez (right abdominal strain) is performing light physical exercises, but has not been cleared for baseball activities. The rookie is eligible to be activated off the IL, but likely will remain there until after the All-Star break.

Guardians: Civale (2-5, 6.28 ERA) seeks his first victory in his fifth start since returning from a left glute injury on June 21.