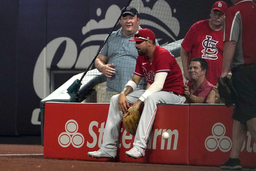 The teams split the four-game series and are tied for the final wild-card spot in the National League. The Cardinals have won two straight but are just 3-6 in their last nine games.

Philadelphia lost consecutive games for the third time since the start of June.

Mikolas (6-7) gave up six hits, including a first-inning home run to Rhys Hoskins, struck out five and walked none in 7 1/3 innings.

"I thought I had good command of the curveball and fastball early," Mikolas said. "I kind of used those two pitches off of each other to keep them off balance."

Mikolas has allowed two earned runs or fewer in six of his past seven starts.

Aaron Nola (6-6) cruised until the bottom of the Cardinals order touched him for three runs in the fifth. Nola went seven innings, allowing five runs on seven hits. He struck out seven and walked none.

"That's a good team over there," Nola said. "We played them good the first two days, we came out with two wins which is good. But we've got a lot of baseball left."

Pujols doubled off the right field wall to lead off the seventh, just missing a home run, to take sole possession of third place with 1,378 extra base hits. He snapped a tie with Musial, passing the Cardinals great to join a top three including Hank Aaron and Barry Bonds.

"It's really special," Pujols said. "Doing it here in front of our fans is even better. I don't have any words to describe my feelings, especially the respect I have for Stan and his whole family and his legacy he left behind through this organization and to myself."

Pujols revealed after the game that he'll participate in the All-Star Home Run Derby this month, his fifth time in the event.

Dickerson followed with his third home run of the season, a 395-foot shot into the Cardinals bullpen.

Nootbar also connected for his third on the first pitch from reliever Michael Kelly in the eighth. Nootbar, who came in as a defensive substitution in the top of the inning, placed his shot over the left field wall to give the Cardinals a 6-1 lead.

Dylan Carlson singled to start the fourth and reached second on a fielder's choice. With one out, Dickerson singled in Carlson and took second on the throw home. Dickerson came in on Edmundo Sosa's double down the left-field line, and Sosa scored on Andrew Knizner's blooper down the right field line.

Phillies: IF Alec Bohm exited with a dislocated left ring finger in the second inning after sliding headfirst into second base attempting to stretch a single into a double. He immediately began to favor his left hand and appeared to say "it's broken" to someone on the field.

"X-Rays were negative," interim manager Rob Thomson said after the game. "They popped it back out and he'll play to tolerance, but we don't know what the move is yet."

Phillies: Will be without J.T. Realmuto, Kyle Gibson, Bohm, and Nola during a two-game series in Toronto beginning Tuesday due to Canadian restrictions on unvaccinated travelers. Neither team has named a starter for the opener. The Blue Jays said over the weekend they hoped RHP Kevin Gausman (6-6, 2.86) is back from a bone bruise in his ankle to take the mound.

Cardinals: LHP Matthew Liberatore (2-1, 4.74) opens a three-game home series against the Los Angeles Dodgers and starter RHP Mitch White (1-1, 3.38). Liberatore is 2-0 and has yet to give up an earned run at home in 10 innings over two games.