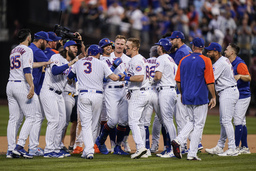 NEW YORK (AP) In tribute to Keith Hernandez, fellow Mets first baseman Pete Alonso sported blue stirrups and a mustache Saturday. Then he homered down the left-field line, the ball landing a couple of levels below where Hernandez's retired number now hangs at Citi Field.

But it was a backup catcher off the bench who delivered the sort of bear-down win Hernandez must have loved.

Tomas Nido hit a tying double with two outs in the 10th inning and scored on a throwing error by reliever Tanner Scott as New York rallied to beat the Miami Marlins 5-4 after honoring Hernandez.

"You really want to figure out a way to try to win a game on Keith's day," Mets manager Buck Showalter said. "So the baseball gods shined on us."

Francisco Lindor lined a two-run homer for the NL East leaders, who overcame injuries to right fielder Starling Marte and catcher James McCann. Both exited in the middle innings and are headed for MRIs on Sunday.

After a pregame ceremony to retire Hernandez's No. 17, the Mets pulled out a back-and-forth game in front of a sellout crowd of 43,336. New York got its fourth walk-off win and improved to 7-0 in extra innings.

The previous time the Mets won on a game-ending error with two outs in extra innings was the famous Game 6 of the 1986 World Series against Boston - with Hernandez in uniform.

"He means so much to this organization," Alonso said.

Jesus Aguilar hit a tying homer in the eighth for Miami, and pinch-runner Billy Hamilton scored on Lindor's throwing error at shortstop in the 10th to give the Marlins a 4-3 lead.

Scott (4-3) struck out the first two batters in the bottom half before Nido, who replaced McCann behind the plate, hit a grounder down the third base line. The ball got under Brian Anderson's glove and rolled into left field, allowing automatic runner Mark Canha to score from second base.

Brandon Nimmo then hit a comebacker to Scott, who fumbled the ball twice before picking it up off the mound and rushing a low, wild throw past first.

Nido scored easily and the excited Mets swarmed Nimmo near second base.

"Terrible play by me," Scott said. "I'm the one to blame for that."

Colin Holderman (4-0) worked one inning for the win. After the Marlins scored in the 10th, Jon Berti got picked off second base by Nido, costing them a good chance to add more.

"There was a lot of weird things that happened during that game," Nimmo said. "I guess to win that way is how the game was going. So, glad to get a W. It was a long, hard-fought game."

Anderson had an RBI double for Miami in the sixth, but Mets second baseman Luis Guillorme made an incredible, twisting relay throw to the plate to cut down another runner on the play. McCann got hurt making a swipe tag.

Miami went ahead 2-1 on a wild pitch by reliever Seth Lugo, but Lindor put the Mets up 3-2 with a two-run homer in the bottom half that chased rookie starter Braxton Garrett.

Alonso hit a solo shot with two outs in the fourth for New York's first hit. It was his 70th RBI of the season - snapping a career-worst 10-game drought without one.

Aguilar also doubled, singled and scored twice for the Marlins, who had won seven of nine. It was their seventh walk-off loss this season, tied with Boston for most in the majors.

Mets: Marte was removed in the fourth with left groin tightness. ... McCann exited in the sixth with discomfort on his left side. ... 2B/OF Jeff McNeil was out of the starting lineup for rest. He is expected to play Sunday and then go on paternity leave, meaning he'll likely miss some or all of the three-game series at second-place Atlanta that begins Monday night. McNeil flied out as a pinch-hitter in the eighth and stayed in to play right field. ... RHP Jacob deGrom (stress reaction in right scapula) is scheduled to pitch into the fourth inning at least for Triple-A Syracuse in his third minor league rehab start during the upcoming week.

Marlins: A few hours before he's likely to be picked for the NL All-Star team, RHP Sandy Alcantara (9-3, 1.82 ERA) pitches the finale of the four-game series Sunday. Alcantara is a top contender to start for the National League on July 19 at Dodger Stadium. He struck out 10 in eight shutout innings of two-hit ball Tuesday against the Angels.

"Sandy's been huge," Mattingly said. "Basically every day he pitches, your `pen gets a day off."