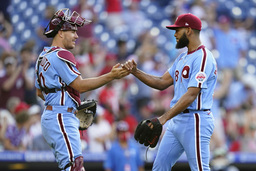 Didi Gregorius added an RBI triple for Philadelphia, which took two of three from last-place Washington and improved to 6-2 against its NL East rival. The Phillies entered third in the division, eight games behind the Mets.

"We're playing well and getting a lot of contributions from a lot of people and that's big," interim manager Rob Thomson said.

Hall extended Philadelphia's advantage to 5-2 with two outs in the seventh with a drive off the right-field foul pole. It was Hall's fourth homer in eight games since being called up from Triple-A Lehigh Valley to take over for injured star Bryce Harper (broken left thumb) as the club's designated hitter batting in the cleanup spot.

"He's really swinging the bat well," Thomson said. "Darick's been kind of a spark for us. He's a pretty calm guy and has a lot of poise."

Hall is hitting .290 with seven RBIs.

"He's just out there playing baseball like he's on a sandlot," Thomson said.

Luis Garcia had a pair of doubles and an RBI before leaving the game in the seventh inning with a stomach issue, and Juan Soto had two hits and drove in a run for the Nationals. Washington has lost seven of eight.

"We had our chances early to blow the game open," Nationals manager Dave Martinez said. "We couldn't do it. All of the sudden we started chasing when the bullpen came in."

The Nationals kept Kyle Schwarber in the ballpark one day after the NL home run leader went deep twice against his former team. Schwarber finished 0-for-3 with a walk and an RBI groundout in the fourth inning that put Philadelphia ahead 4-2.

Nick Nelson (3-1) gave up one hit in two scoreless innings in relief of starter Bailey Falter. Seranthony Dominguez finished off another strong performance by the Phillies' bullpen, working a perfect ninth for his third save in four chances.

The Phillies went ahead with three runs in the third off Joan Adon (1-12).

Hall's double off the wall scored Rhys Hoskins from first and moved Nick Castellanos to third. Castellanos scored on J.T. Realmuto's sacrifice fly to left, and Hall scored on Didi Gregorius' triple off the wall in right field that was misjudged by right fielder Soto. Soto camped under the ball at the warning track, but he didn't reach out far enough to make the catch. Martinez said Soto got his glove caught on a chain link in the fence.

Adon's struggles continued, as the 23-year-old right-hander gave up four runs on six hits in four innings with three strikeouts and three walks to raise his ERA to 7.10 in 14 starts.

"He's got great stuff," Martinez said. "We just have to continue to work with him on his command."

Martinez said the starter for Adon's next scheduled turn in the rotation is to be determined.

The Nationals took a 2-0 lead off Falter on Maikel Franco's first-inning RBI single and Soto's RBI single to right in the second.

Soto extended his hitting streak to 10 games and his on-base streak to 17.

Castellanos has struggled in his first season with the Phillies. Castellanos batted .309 with 34 homers, 100 RBIs and a .939 OPS last year for Cincinnati before signing a $100 million, five-year contract with Philadelphia. He is hitting .251 with eight homers and 44 RBIs after going 1 for 4 with a strikeout on Thursday.

Thomson said he has not considered dropping Castellanos in the lineup. Castellanos batted third on Thursday.

"I haven't really thought about it because I think he's going to come out of it at any moment," Thomson said. "When he does, he'll be in the right spot."

Nationals: Placed RHP Reed Garrett on the 15-day injured list with right biceps inflammation. Garrett has a 8.22 ERA in six games. ... Martinez said Garcia's stomach problem was similar to that of Nelson Cruz, who was sidelined on Tuesday and Wednesday with a stomach virus. Cruz returned on Thursday and went 0 for 3 with three strikeouts as the DH.