Padres rally for 4 in 9th, beat Dodgers 4-2 to avoid sweep 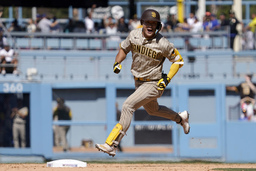 LOS ANGELES (AP) Even in the monotony of a long season, Padres manager Bob Melvin knows some results are more important than others when it comes to sustaining a team's confidence.

That's why Sunday's 4-2 comeback by San Diego over the Los Angeles Dodgers might resonate for a while.

"This would have been a really tough game to lose. There's some games in the middle of the season that are bigger than others. This was a huge swing for us," Melvin said.

Besides a mental boost, the Padres made it a physical win. Jake Cronenworth lined a single off closer Craig Kimbrel's back to spark a four-run rally in the ninth inning.

The victory helped the Padres avoid a four-game sweep by their Southern California NL West rivals and puts them 3 1/2 games back at the midway point. San Diego improved to 47-34.

It also snapped a nine-game losing streak at Dodger Stadium and marked only their second win in the last 16 games over the Dodgers.

"It keeps us within shouting distance. We're still not fully whole. They went after us this series pretty hard and took advantage," Melvin said.

The Padres had only one runner get beyond second base in the first eight innings before breaking through for all their runs in the ninth.

Down 1-0, Cronenworth began the comeback with his infield hit that struck Kimbrel (1-4). Luke Voit then followed with a deep flyball that bounced off the top of the Dodgers' bullpen gate in left center - Cronenworth scored the tying run while Voit wound up with a double.

Dodgers manager Dave Roberts said scans on Kimbrel's back were negative. By going three of the past four days, Kimbrel is expected to be down a couple days after blowing his third save opportunity in 17 chances.

"There was thought (of taking him out after getting hit by Cronenworth) but a guy like that when he says he's good to go and throw some pitches, we liked what we saw," Roberts said. "We let him go and he got behind to Voit."

With two outs, Ha-Seong Kim homered off Yency Almonte for a 4-1 lead.

"We felt like we were putting good pressure on and kept fighting to the end. This series didn't go our win but to get this one against (Clayton) Kershaw and Kimbrel is big," Hosmer said.

Taylor Rogers worked the ninth for his 23rd save, giving up a double by Betts and a sacrifice fly by Freddie Freeman in the ninth.

Kershaw had gone 1-2 and allowed 10 runs in 19 innings in four starts since returning from the IL, but the Dodgers ace had one of his best starts of the season. The lefty struck out eight and walked only one as he went seven innings for the first time since May 7 against the Chicago Cubs.

"It was better for sure. Better command of my fastball and slider made for a better day," Kershaw said.

Betts was activated before the game after being sidelined two weeks due to a cracked right rib. He was back in his familiar leadoff spot and playing right field and he reached base four times.

Betts led off the Dodgers first with a double into the left-field corner and scored when Trea Turner lined a fastball from MacKenzie Gore down the left-field line for a double.

In the fourth, Betts tried to score from second on a base hit to left by Freeman, but Jurickson Profar quickly made a play on the ball and threw home, where catcher Jorge Alfaro applied the tag. Betts, who is still feeling some effects from the injuries, did not try to slide.

Gore allowed one run in 5 2/3 innings on five hits and struck out four.

The Dodgers and Padres have 12 more meetings, with nine in September. They won't face each other until a three-game weekend series in San Diego beginning Aug. 5.

Dodgers: IF Hanser Alberto is likely to miss three games after he received an injection for knee pain. ... OF Chris Taylor was available off the bench after leaving Saturday's game in the sixth inning due to a left foot contusion.

The Padres called up RHP Tayler Scott from Triple-A El Paso to help shore up the bullpen. LHP Ray Kerr was optioned and RHP Kyle Tucker designated for assignment.

Dodgers: LHP Julio Urias (5-2, 2.94 ERA) gets the start on Monday as Los Angeles opens a three-game set against Colorado.