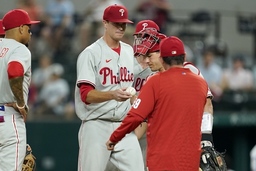 A couple of former teammates kept the right-hander from getting a win to go with it.

Lowe broke a 0-0 tie in the fifth with his solo shot before Heim also hit his ninth of the season in the Rangers' eighth consecutive victory over the Phillies. It's the longest winning streak for Texas against an NL team since interleague play began in 1997.

"It's always interesting but fun to face guys that you've been on the same team with and you've known for a while," Gibson said. "That's always a different part of the competition side of it, and I enjoy that. Didn't go our way."

Marcus Semien and Kole Calhoun each connected on a two-run homer against Jeurys Familia in the eighth. Semien had three hits, including a double, before Corey Seager's RBI single when Gibson was still around in the sixth.

Perez (5-2) outdueled Gibson in the matchup of a lefty well on his way to a first All-Star nod in his second stint with the Rangers and a right-hander who was Texas' opening day starter last year and a first-time All-Star.

Gibson (4-3), who allowed three runs and seven hits in 6 1/3 innings, was sent to the Phillies at the trade deadline last year, less than three weeks after throwing a scoreless inning in the Midsummer Classic.

It was just the fourth loss in 19 games for the Phillies, while interim manager Rob Thomson lost for the first time in six series openers since taking over for the fired Joe Girardi.

Thanks to a couple of early double plays, Gibson had faced the minimum number of hitters with two outs in the fifth when Lowe went the other way to left on the first pitch.

Heim pulled a 2-1 pitch just over an angled corner of the wall in right, the crowd's reaction delayed by a leaping try from Nick Castellanos.

"It's frustrating that they hit a couple of pitches pretty hard that I felt like I threw pretty well," said Gibson, who didn't allow a walk in a second consecutive start. "If I can get through six, seven innings and not walk guys and attack the strike zone like that, I'll take my chances."

Perez helped himself by knocking down a two-out liner from Castellanos with two on when the game was still scoreless in the fifth. Shortstop Corey Seager scooped the roller that deflected off Perez's glove and threw to first to end the inning.

The Phillies had runners on first and again in the sixth, this time with one out, when left fielder Calhoun made a diving catch of Matt Vierling's sinking liner.

Perez struck out six while pitching around six hits, three walks - all to Rhys Hoskins - and two wild pitches. The 31-year-old lowered his ERA to 1.96.

"Just the way he navigates through any difficult moment," Texas manager Chris Woodward said. "Guys get on base, made some really quality pitches. When things have gotten hard for him, he gets better. Not the other way around."

Philadelphia slugger Bryce Harper could be back in the lineup for the finale of the two-game series after an infected blister on his left index finger sidelined him for two games over the weekend at Washington, his former team. Thomson said the infection had improved enough for him to be available off the bench in the opener.

A six-time All-Star and this year's leader in voting for National League DH, Harper is hitting a team-best .326, and his OPS (1.013) is second in the NL to St. Louis' Paul Goldschmidt. Harper is restricted to DH duty because of an elbow injury.

Texas catcher/DH Mitch Garver was activated off the COVID-19 injured list, and rookie 3B Josh Smith returned from the IL after being out since June 4 with a left shoulder sprain. Woodward was concerned about playing time for slumping backup catcher Sam Huff, so the 22-year-old was sent to Triple-A Round Rock along with OF Zach Reks, a COVID-19 replacement. C Meibrys Viloria was promoted from Round Rock to back up Heim.

Phillies: Thomson said RHP Zach Eflin (right knee discomfort) was on track to start Saturday at San Diego after getting pulled after just two innings in Sunday's 9-3 loss to the Nationals. ... INF Johan Camargo (right knee strain) was activated off the 10-day IL.

Rangers: RHP Glenn Otto, who has been on the COVID-19 injured list since he was a late scratch at the Chicago White Sox on June 10, was scheduled for a rehab start with Triple-A Round Rock on Tuesday night.

Texas opening day starter Jon Gray (2-3, 4.27 ERA) is set to try to build on his best back-to-back starts of the season, facing Phillies RHP Zack Wheeler (6-3, 2.69). Gray is coming off seven scoreless innings in 7-0 win at Detroit after allowing one run with 10 strikeouts in six innings while getting a no-decision in an 8-6 victory over the Chicago White Sox. Wheeler has allowed just two runs in 21 career innings against the Rangers.