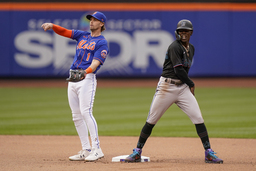 NEW YORK (AP) Taijuan Walker retired 18 in a row and pitched into the seventh inning, Francisco Lindor homered for the second straight game and the New York Mets beat the Miami Marlins 3-2 Saturday.

The Mets have won three straight and five of six, earning their NL-best 44th victory and improving to a season-high 21 games over .500. It's the fastest they have reached that mark since 1986, when the eventual World Series winners improved to 36-15.

Walker (5-2) pitched one-run ball and struck out nine over 6 2/3 innings in front of a large crowd on an unseasonably cool and breezy day. Jon Berti singled to lead off the game and stole a base in each of the next two at-bats, but the speedster was stranded as the right-hander fanned the side.

With napkins, hot dog wrappers and other garbage fluttering around the field, Walker blew the Marlins away with a dizzying mix of four-seamers, sinkers, sliders and a particularly tough splitter.

"He had everything at his disposal," Mets manager Buck Showalter said. "Every pitch they had to honor."

Jazz Chisholm Jr. walked against Walker in the seventh, stole second and scored on Avisail Garcia's double. Walker was charged with two hits and a walk.

"I was just trying to go out there and get strike one, and just get ahead in counts and try and put them away when I did get two strikes," Walker said.

For the second consecutive game, Lindor homered with his mother and several other family members in attendance. With one out in the third, Lindor drove Braxton Garrett's 2-2 fastball over the left-center field wall to score Starling Marte and give the Mets a 3-0 advantage. Lindor pointed toward his family as he crossed home plate, pumping his fist several times.

Lindor's mother, Maria Serrano, visited Citi Field on Friday for the first time since he was acquired from Cleveland in January 2021 and witnessed her son club a three-run homer. He has driven in six in the first two games of the series and has 51 RBIs this season.

"She brings the best out of me, for sure," Lindor said. "This whole entire weekend is for her and my family, and I'm also getting good pitches to hit."

Walker has allowed two runs in 12 2/3 innings over his last two starts, fanning 19.

Jeff McNeil singled home Mark Canha to put New York on the board in the second.

Drew Smith replaced Walker in the seventh and retired all four batters he faced, striking out three.

Edwin Diaz notched his 14th save in 17 chances in an eventful ninth. Berti walked to lead off, stole second and advanced to third on a throwing error by catcher Tomas Nido. Chisholm then fanned looking and was ejected by home plate umpire Adam Beck after arguing the call.

"You're not going to sit there and blame the whole game on a call," Marlins manager Don Mattingly said of the controversial punchout. "Obviously he misses that one. You don't want to see him miss them with guys on base."

Diaz struck out Jorge Soler before Garrett Cooper singled home Berti to cut the lead to one. Cooper then stole second but was stranded when Garcia flailed at strike three to end the game.

The Marlins dropped three straight for the sixth time this season.

Lindor ranged quickly to his right to snag a scorching 111.2 mph grounder by Bryan De La Cruz in the third. With De La Cruz hustling toward first, Lindor planted in the hole and fired a one-hopper across the diamond to a stretched-out Pete Alonso for the out.

Mets: 3B Eduardo Escobar was back in the starting lineup after sitting two straight games, going 0 for 3 and manning all nine innings at the hot corner. Escobar underwent tests at a hospital Thursday after experiencing a headache and dizziness while taking grounders that afternoon. He was available off the bench Friday night but did not play.

Mets: RHP Chris Bassitt (5-4, 4.01 ERA) faces the Marlins for the first time, coming off a victory over Milwaukee on Tuesday in which he hurled a season-high eight scoreless innings.