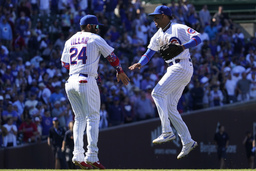 CHICAGO (AP) Willson Contreras had three hits and stole a base in his first game against younger brother William, helping the Chicago Cubs beat the Atlanta Braves 6-3 on Saturday.

The Contreras brothers both started at catcher, marking the first time they shared a field. They hugged before the 30-year-old Willson, a two-time All-Star, singled in the first inning. Contreras then stole second base against his brother, and scored on Jonathan Villar's two-run single.

"I didn't want to get beat by my younger brother. I'm pretty sure he was thinking the same thing. We're professionals. We love our teams," he said.

The brothers are the first to start at catcher in the same game since Yadier Molina for St. Louis and Jose Molina for Tampa on June 10, 2014, according to the Elias Sports Bureau.

"From my first at-bat, when I gave him a hug, I was proud," Willson Contreras said. "Even before the game, I was trying to keep myself together."

Willson Contreras later doubled and drove in a run. His 24-year-old brother had two hits for the Braves.

Justin Steele (2-5) got his first win since his season debut April 9 against Milwaukee. He allowed two runs and five hits in five innings.

Kyle Wright (7-4) gave up five runs and a career-high 11 hits in six innings.

"I didn't feel like I gave up that many hits," he said. "I thought I executed pretty good, got some soft contact but put the ball in play and some things happen sometimes. Give them credit."

Rafael Ortega homered and Alfonso Rivas and Andrelton Simmons each had two hits for the Cubs.

Duvall, Ronald Acuna Jr. and Michael Harris II had a pair of hits for the Braves. Atlanta hasn't lost a season series against the Cubs since 2017 and needs to win Sunday to split this year.

The Cubs extended their lead to 3-0 on Acuna's throwing error on Willson Contreras' single to right field in the second. They made it 4-0 on Jason Heyward's double that bounced away from Duvall in left in the third.

Duvall homered in the fifth. The Braves lead the NL in homers but have just one in two games against Chicago.

Austin Riley's bases-loaded sacrifice fly pulled Atlanta within 4-2 in the fifth. Heyward made a sliding catch on Marcell Ozuna's flyball to right for the third out.

Braves: RHP Jacob Webb was outrighted to Triple-A Gwinnett after he was designated for assignment Thursday.

Cubs: OF Clint Frazier accepted an assignment at Triple-A Iowa after he was designated for assignment June 10.

Cubs: INF Frank Schwindel (low back strain) went on the 10-day injured list. He exited in the second inning Friday after running to first on a groundout. Schwindel had a similar injury during spring training that needed three days of rest, manager David Ross said. INF Rivas was recalled from Iowa to replace Schwindel. ... 2B David Bote (left shoulder surgery) resumed his rehab assignment with Iowa that was paused because of dizziness.