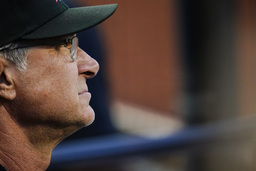 NEW YORK (AP) Francisco Lindor homered after being surprised by his mom's first visit to see him at Citi Field, Pete Alonso slugged a grand slam during an eventful sixth inning and the New York Mets beat the Miami Marlins 10-4 Friday night.

Lindor's wife, Katia, surprised her husband by flying in his mother, Maria Serrano, for her first visit to New York since Lindor was acquired from Cleveland in January 2021. Lindor said his mother's travel has been limited since she suffered an aneurysm that led to a stroke in 2020.

"My wife was very emotional, telling me she was going to give me one of the great Father's Day gifts," Lindor said. "She's the best. She surprised me (and) my whole family."

The visit in the press conference room a little more than an hour before first pitch provided a lift to Lindor, who has been battling a sore right middle finger - he accidentally caught it in a hotel room door in Los Angeles on June 2 - and entered Friday hitting .173 this month.

"It gave me that extra energy that I needed," Lindor said.

Lindor yelled as he rounded the bases during his three-run homer in the first inning off Pablo Lopez (4-3) before pointing to his family in the suites after he crossed home plate.

"Those are moments - I got emotional when he hit his home run, I could tell he was too, to see her son do that tonight," Mets manager Buck Showalter said.

Lindor robbed Willians Astudillo and Jazz Chisholm Jr. of hits in the second and third innings.

The Puerto Rican star was later hit by two pitches - including one with the bases loaded. The oft-plunked Mets were stuck four times, pushing their major league-leading total to 49.

Lindor drew a bases-loaded hit by pitch in the sixth, one pitch before Alonso hit his second career grand slam to cap a seven-run frame in which it briefly appeared the Marlins turned a triple play. Alonso doffed his cap to a crowd of 36,111 chanting "M-V-P!"

Earlier in the sixth, J.D. Davis had an RBI single and Starling Marte coaxed a bases-loaded walk.

"You go from a triple play to 10 runs," Showalter said. "That's a turning point."

Center fielder Bryan De La Cruz, who dropped a routine fly by Marte immediately before Lindor's homer, led off the fifth by homering off Carrasco. Jorge Soler delivered an RBI double in the sixth, when Jon Berti hit into a run-scoring fielder's choice. Lewin Diaz scored on a balk in the eighth.

Soler, Cooper and Avisail Garcia had two hits apiece for the Marlins, who outhit the Mets 10-9.

"Felt like we were kind of swimming up stream from the very beginning of that game - three hitters in, we're down 3-0," Marlins manager Don Mattingly said.

Lopez, pitching for the first time since he was hit on the right wrist by Michael Brantley's comebacker June 10, gave up seven runs (six earned) on eight hits with one walk and five strikeouts in 5 1/3 innings.

ALMOST TWICE (OR THRICE) AS NICE

De La Cruz came within inches of a spectacular catch that briefly had the Marlins thinking they'd turned a triple play in the sixth.

With two out, he tracked Luis Guillorme's fly to the warning track, collided with the wall and barehanded the ball after several bobbles for an apparent catch. He then threw to the infield, where Mark Canha and Jeff McNeil were doubled off for a triple play.

McNeil, however, had tagged up at second upon seeing De La Cruz apparently catch the ball and would have been safe at third.

Replays showed the ball hit the wall before De La Cruz caught it. The out call was overturned and Guillorme was awarded a single.

Longtime MLB umpire Dale Scott signed copies of his book "The Umpire is Out" before the game in the rotunda at Citi Field. Scott came out as gay after the 2014 season. He was in the majors for 33 seasons until retiring in 2017 and worked the World Series three times.

Scott was in town for the Mets' Pride Night, one of seven Pride events he'll attend this month.

Marlins: 1B Jesus Aguilar and OF Jesus Sanchez were each placed on the injured list without a designation. The Marlins recalled Diaz and OF Jerar Encarnacion from Triple-A Jacksonville. ... IFs Brian Anderson (back) and Joey Wendle (right hamstring) are scheduled to take batting practice at the Marlins' spring training complex Saturday.

Mets: RHP Tylor Megill (right shoulder) was shut down for four weeks after an MRI revealed a strain. ... 3B Eduardo Escobar was available off the bench after missing Thursday's game while undergoing tests at a local hospital. Escobar said he had a headache and felt dizzy while taking grounders Thursday afternoon. ... RHP Jacob deGrom (right scapula) threw his fifth bullpen session Friday.

Marlins: LHP Braxton Garrett (1-1, 4.00 ERA) will make his third start since being promoted from Triple-A Jacksonville on June 5.