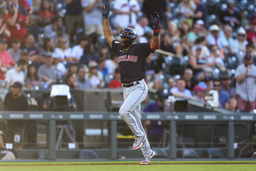 DENVER (AP) Jose Ramirez got four more hits, Steven Kwan made a remarkable diving catch in the seventh inning to preserve the lead, and the Cleveland Guardians beat the Colorado Rockies 7-5 on Wednesday night for their 12th win in 15 games.

Josh Naylor delivered the go-ahead double in the fifth and Amed Rosario added four hits, including his first home run, as Cleveland (31-27) moved four games above .500 for the first time this season.

Kwan pinch-hit for Oscar Mercado in the fifth inning after Mercado dropped a fly ball, allowing a run to score. With the Guardians clinging to a 6-5 lead with runners at the corners and two outs, Kwan bolted to his right on Jose Iglesias' liner and made a fully extended, diving grab on the warning track.

"I thought he had zero chance of catching that," Cleveland manager Terry Francona said. "I'm thinking, OK, he's going to leave his feet and that guy at first is going to score. He willed himself to catch that ball. That was a great play."

Added Kwan: "I needed every inch of me and the glove on that."

Bryan Shaw (3-0) pitched a scoreless eighth and Emmanuel Clase worked the ninth for his 13th save.

Charlie Blackmon had two hits on the night he reached 10 years of major league service time and Yonathan Daza doubled, singled and drove in a run for the Rockies.

"We just couldn't generate the big hit when we needed to," manager Bud Black said.

Ramirez entered the night with a major league-best 62 RBIs. While he didn't add to that total, his third-inning double gave him 39 extra-base hits, the most in franchise history through the first 58 games of a season. Ramirez is 14 for 29 in the past seven games, pushing his batting average to .307.

Konnor Pilkington lasted just 4 1/3 innings for the Guardians, giving up four runs - two earned - and six hits. He was hurt by poor defense, including his own.

Pilkington threw wildly to first in the second, allowing a run to score. Mercado dropped a routine fly that would have been the final out of the third, putting Colorado up 4-2.

"We've got to play clean baseball to win, so we were pretty fortunate," Francona said.

That's because the Rockies weren't much better in the field. On a double steal in the fifth, catcher Elias Diaz threw the ball into left field to bring in a run in as Cleveland rallied to take a 5-4 lead. It gave the Rockies an MLB-high 52 errors and they've made at least one in a franchise-record 12 straight home games.

Ramirez singled in the sixth off Chad Smith for his fourth hit. Luke Maile, who had walked, moved to third and then scored on Smith's wild pitch to make it 6-4.

Rosario extended his hitting streak to nine games in the third when he pulled Austin Gomber's changeup to left for his first homer since September to make it 2-all.

"There are some close losses that hurt more than others," Gomber said, "like today where I give away the lead."

Guardians: Asked about Naylor's awkward slide into second Tuesday, Francona said he's still cautious at times after Naylor's gruesome ankle injury a year ago. "I tried to remind him for what he's been through, where he's at, he's got to be happy," Francona said. ... Franmil Reyes (hamstring), who was scheduled to be the DH on Thursday for Triple-A Columbus, could instead play the outfield. "We don't want to hold him back," Francona said. ... RHP Aaron Civale (glute) allowed one unearned run and two hits with one walk and seven strikeouts in 4 2/3 innings for Columbus.

Rockies: Black is searching for a new setup man after announcing RHP Tyler Kinley will likely miss the remainder of the season with an elbow flexor tear. "I think he was potentially on that track (for making the All-Star Game)," Black said.

The loudest cheers came during a seventh-inning pitching change when the Rockies showed the Colorado Avalanche's overtime goal on the video board that gave them a 4-3 victory over Tampa Bay in Game 1 of the Stanley Cup Final. The game was being played about a mile away at Ball Arena.

Rockies LHP Kyle Freeland, a Denver native, is the team's biggest Avs fan. His locker was decorated with a Cale Makar sweater and an "All Hail Cale" T-shirt.

"I'll be coming in (the clubhouse) to check on them to see how they're doing," Freeland said before the game.