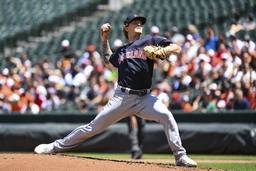 BALTIMORE (AP) Those arriving late for Sunday's game between Cleveland and Baltimore probably missed the Guardians' lone offensive salvo, a three-run homer in the first inning by Andres Gimenez.

After that, starter Zach Plesac and the Guardians had just one task: Make the early advantage stand up.

"(Gimenez) took a good swing and then we just hung on for dear life," manager Terry Francona said. "That's a long time to hang on."

Plesac and three relievers dutifully handled the chore, limiting the Orioles to four hits in a 3-2 victory that provided Cleveland with its first series win at Camden Yards since 2018.

Gimenez, the fifth batter of the game, hit a shot to right field off lefty Dean Kremer (0-1) following a single and a walk. Turns out, that was enough offense to get past the last-place Orioles.

Given a 3-0 cushion before throwing his first pitch, Plesac said: "It's always good going in there and not trying to be too fine, just go in there and pound the zone. It's definitely huge to take the mound with a lead."

Plesac (2-4) struck out eight over six innings. He gave up two runs and four hits with no walks to earn his first victory in seven starts since April 27. The right-hander allowed just one single before he hit Trey Mancini with a pitch to open the fourth and Ryan Mountcastle homered to straightaway center.

Baltimore failed to score after getting runners to second and third with no outs in the fifth and went hitless over the final four innings.

Emmanuel Clase got three outs for his ninth save.

The Guardians took two of three from the Orioles and have won five of six overall. Prior to this series, Cleveland had lost four of its last six games in Baltimore while being outscored 51-18.

"We have not played well here - ever," Francona said. "We've come in here and really got pushed around at times."

Activated from the injured list before the game, Kremer returned from a left oblique strain to give up three runs, five hits and a walk over 4 1/3 innings in his season debut. Obtained in the July 2018 trade that sent Manny Machado to the Dodgers, Kremer is 1-9 over 13 career starts.

"If you throw out that first inning he was great," Orioles manager Brandon Hyde said. "I thought he threw the ball extremely well. I'm really encouraged. I thought I saw a lot of improvement from last year."

Gimenez smiled broadly when asked about playing at Camden Yards, reconfigured or not.

"I really like this ballpark. There are a lot of good memories here," he said.

Guardians: C Austin Hedges, who strained his right quadriceps muscle on Friday, got a second straight day off after agreeing to the cautious approach broached by Francona via text message. "He said, `You know what? I get it,'" Francona said. "He's doing OK, but I think it just makes sense to wait until tomorrow."

Orioles: Prized pitching prospect Grayson Rodriguez will be sidelined until at least September with a Grade 2 lat strain, general manager Mike Elias said. "This is an injury that we have a very, very high degree of confidence is going to heal and he'll be back to himself in no time," Elias said, "and at the very least, put himself in a position to join our rotation out of spring training." Rodriguez, a right-hander, is the top pitching prospect in baseball according to MLB Pipeline. He appeared on the verge of reaching the majors until sustaining the injury during Wednesday's start for Triple-A Norfolk.

Orioles: Following an off day Monday, the Orioles begin a two-game series against the Chicago Cubs. Baltimore has gone 0-6 against the Cubs since winning at Wrigley Field in 2008.