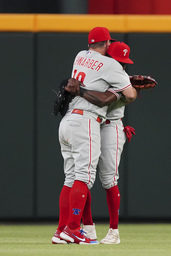 ATLANTA (AP) Zack Wheeler is rounding into the form that helped him finish second in the Cy Young Award voting last year.

"Getting there, yeah," he said. "I mean, the results have been good, but still working on some things and try to continue to get better every time out. That's the key, that's the goal and try to be the best."

Wheeler pitched 6 2/3 strong innings with a season-high 10 strikeouts, Rhys Hoskins knocked in three runs with an early double and the Philadelphia Phillies beat the Atlanta Braves 7-3 on Monday night.

The teams began the day tied for second in the division, eight games out of the lead, and hadn't met since Sept. 30 when the defending World Series champion Braves won to clinch their fourth consecutive NL East title.

Wheeler (3-3) improved to 3-0 with a 1.38 ERA with 40 strikeouts in his last five starts and has allowed two runs or less in four of them. After giving up eight hits and two runs with no walks, Wheeler is 3-2 with a 1.79 ERA in six starts against Atlanta since the start of last season.

"Another very good performance on Wheeler's part," Phillies manager Joe Girardi said. "I thought he didn't really lock in until the third inning and then he really seemed to get it going then. He was different."

Kyle Schwarber walked to start the second and advanced on J.T. Realmuto's single and Roman Quinn's walk. Hoskins hit a gapper into right-center to clear the bases for a 3-0 lead. Of Hoskins' 35 hits this season, 16 have been for extra bases.

The Phillies padded the lead in the third with three more runs for a 6-0 lead on Realmuto's RBI triple and Quinn's two-run double. Atlanta starter Tucker Davidson (1-1) was charged with four hits, five runs and four walks in 2 2/3 innings. An RBI single by Jean Segura made it 7-0 in the fourth.

Wheeler set down 11 in a row before Austin Riley doubled in the fifth and scored on Dansby Swanson's single to trim the lead to 7-1. An RBI single by Riley in the seventh made it 7-2.

Among all pitchers with at least 45 innings against a single opponent since the start of 2020, Wheeler began the game with a 1.75 ERA against Atlanta that ranks second in the majors to St. Louis' Adam Wainwright, who has a 0.55 ERA against Pittsburgh.

Wheeler credited his slider for 20 swings and misses.

"It's not so much downward action," he said. "It's more `slidey,' so I think that's playing a little bit better. It's in the zone and it's kind of sliding out. You know, (with the) fastball I'm able to locate it and elevate when I want most of the time. The two-seam is always going to be there arm side. It's pitching, trying to miss bats, trying to miss barrels, keep the hitters off balance. Those type of things will come."

Quinn easily threw out William Contreras from center field on a two-hopper at the plate in the first as Contreras tried to score from second on Marcell Ozuna's single. Wheeler struck out Matt Olson with a runner at third to end the inning.

Quinn's throw was clocked at 99.9 mph, the fastest from the Phillies' outfield this season.

"I got a pretty good jump on it," Quinn said. "I fielded the ball cleanly. I peeked up and seen that he was running and had my momentum going towards home plate. It was great. It was a big play."

Ozzie Albies' RBI single tacked on a run for Atlanta in the eighth off Connor Brogdon to make it 7-3.

Phillies closer Corey Knebel faced the minimum in the ninth in a non-save situation.

Braves RF Ronald Acuna Jr. went 0 for 5 after reaching safely in 29 straight games, which was the longest active streak in the majors dating to last June 25. He began the game with a .414 on-base percentage during the streak. He had a career-best 32-game stretch in 2019.

Braves manager Brian Snitker made several changes to the lineup, batting Contreras second and playing the catcher in left field for the first time in his career, dropping Olson from second to fifth, Albies sixth and Riley down to seventh. The foursome combined to go 6 for 15.

"I don't know if I had too much coffee this morning," Snitker said. "Just move some of the pieces around. I talked to a couple of guys, just to give them a different look where they're hitting and change the scenery a little bit. Maybe that'll get them going. I don't know. We've been searching to get that part going."

Philadelphia SS Didi Gregorius (left knee sprain) is making small progress, but the team has no immediate timetable for his return. "He'll do everything tomorrow again, and then we'll make an assessment after that," Girardi said. "The hoop that he has to get through is the hitting. Rotating on the back knee, that's the thing."