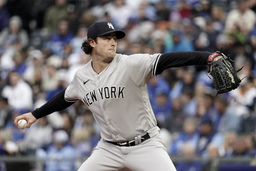 KANSAS CITY, Mo. (AP) Turns out the New York Yankees can win ballgames even when they don't put one out of the park.

It helps having Gerrit Cole on the mound.

"No question, when you want to be a complete team and a really good one, you have to find ways at times to win in different ways," Yankees manager Aaron Boone said. "I thought the pitching staff led by Gerrit made really good pitches."

Cole (2-0) allowed five hits and two walks while striking out six in another dominant start at Kauffman Stadium. The hard-throwing right-hander has allowed only two earned runs in 21 1/3 innings in the pitcher-friendly ballpark.

Aroldis Chapman worked a perfect ninth for his fifth save, helping the Yankees improve to 15-6 - just the fifth time since 1959 that the 27-time World Series champions have won at least 15 of their first 21 games.

Normally a power-hitting team, one that had hit 18 homers in its previous seven games, the Yankees saw Gleyber Torres and Isiah Kiner-Falefa manage sacrifice flies off inconsistent Royals starter Carlos Hernandez (0-1) but little else.

Hernandez walked five of the first 15 batters he faced and, at one point, had thrown more balls (37) than strikes (36). But the young right-hander limited the damage against a Yankees lineup that loves to inflict it.

Hernandez worked around a walk in the first, then loaded the bases with nobody out in the second but allowed just one run thanks to a double play and a groundout. Hernandez loaded them again with one out in the third, gave up a sacrifice fly, then watched Salvador Perez throw out Anthony Rizzo at third base to end the inning.

The Yankees also drew a leadoff walk in the fourth and scored on another sacrifice fly, giving them a 3-0 lead.

With Cole on the mound, that's usually enough.

He would've set down the first eight batters he faced if not for Kiner-Falefa's miscue at shortstop, ending the Yankees' 13-game errorless streak. Cole's command escaped him briefly in the third, but he got Nicky Lopez to fly out to leave the bases loaded. And in the fourth, Cole froze Bobby Witt Jr. and Kyle Isbel to strand runners on second and third.

Miguel Castro and Clay Holmes each pitched a scoreless inning before Chapman finished things off.

"You give up five walks to a potent offense, it's going to eventually catch up to you," Royals manager Mike Matheny said. "We had a couple of chances with runners on second and third and they made pitches when he needed to."

Yankees slugger Aaron Judge got his scheduled day off Saturday, even though he's hit three homers in his last four games and five in his last seven. Judge also has hit safely in nine of his last 10 with 12 RBIs over that span.

"It's always hard to have him out," Boone said, "but I was going to be pretty disciplined about it with another day game (Sunday) after a night game and then going to the turf in Toronto."

The Royals debuted their "City Connect Series" jerseys featuring art deco-inspired graphics, a nod to the crown of Kauffman Stadium and the fountains of Kansas City, and the deep blue color that the team wore in the 1970s and '80s.

Yankees: LF Joey Gallo left the game with tightness in his left groin. "I'm not concerned," he said. "It just tightened up on me a little bit." ... C Ben Rortvedt (right oblique) had a recent exam that showed no trace of the strain he sustained in February, though his return date is still unclear. "He's doing well and over the injury now," Boone said.

Royals: Witt was hit on his wrist in the eighth inning but remained in the game. "He's going to be a little bit sore," Matheny said, "but everything we've seen so far, he's going to be OK." ... LHP Jake Brentz went on the injured list Saturday with a left flexor strain and RHP Matt Peacock was recalled from Triple-A Omaha to replace him.