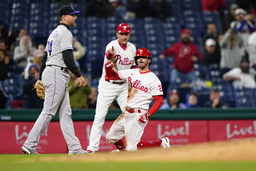 PHILADELPHIA (AP) Bryce Harper can't throw a baseball right now. Hitting one, though, is no problem.

Harper had a triple among his three hits as Philadelphia's designated hitter, Odubel Herrera homered and drove in two runs, and the Phillies won their third straight over the Colorado Rockies, 7-3 on Wednesday night.

Didi Gregorius added a double, single and two RBIs for Philadelphia, which has outscored Colorado 25-8 in the series. The Phillies earned their first series win since taking two of three from Oakland to open the season and will go for the four-game sweep on Thursday.

"Coming into this series we needed to win games and we needed to get going," Harper said. "There are teams in our division that are really good, and we've got to get going and play the way that we are right now."

Harper hasn't played right field since April 16 due to a strained right elbow, and he won't be back in the outfield anytime soon. Harper tested his elbow with pregame throwing for the second straight day, but manager Joe Girardi said the elbow isn't where it needs to be. The NL MVP said he'll take another week off from throwing before trying again.

Meantime, he'll keep serving as the Phillies' DH - a role in which he's excelled. Harper is batting .366 with four doubles, a triple, two homers and six RBIs as the DH since April 17.

"It is impressive," Girardi said. "You have to learn what to do with your mind when you're not in the field. For a guy who likes to be in the field, it's not always easy. He's handled it well."

The game was tied 2-2 when the Phillies went in front for good in the third. Harper tripled to left-center and scored on Nick Castellanos' groundout.

"Trying not to miss pitches in the zone, I think that's what I've been doing lately," Harper said. "Get on base for the guys behind me. As a lineup these last three days we've done a great job of getting on starters early and making it tough for bullpen guys."

C.J. Cron homered and Jose Iglesias had four singles for the Rockies.

"We kept battling all the way through the game, which is what we do," manager Bud Black said. "Things didn't go our way with the big hit."

After going deep in Tuesday's 10-3 win over Colorado, Herrera greeted Ryan Feltner (0-1) with his fifth career leadoff homer, a drive to the second deck in right.

Philadelphia got the run back in the bottom of the frame when Garrett Stubbs, in the lineup at catcher with J.T. Realmuto getting a day off to rest, tripled to right field to score Gregorius.

Feltner, making his first start of the season and third of his career, recovered from a rocky first inning in which he threw 36 pitches. The 25-year-old right-hander ended up lasting five innings, allowing four runs on seven hits with seven strikeouts and two walks.

"I liked the way he hung in there," Black said. "There's a will in there that I like and I like the stuff, but there is some stuff he has to clean up a little bit moving forward."

Suarez surrendered three runs on seven hits with three strikeouts and a walk in six innings.

Corey Knebel pitched a scoreless ninth for his fourth save in as many tries.

After committing five errors that led to seven unearned runs in the first two games of the series, Colorado's defense played error-free on Wednesday. But a passed ball by catcher Elias Diaz in the seventh helped the Phillies load the bases. Philadelphia then scored twice, on Alec Bohm's infield chopper to third and Gregorius' sacrifice fly, to go in front 7-3.

The Rockies made several strong plays in the field, including shortstop Iglesias' putout from deep short in the fourth, second baseman Alan Trejo's over-the-head catch in the sixth and Connor Joe's running catch in left to end the seventh.

CATCH ME IF YOU CAN

Harper and Castellanos converted a double steal in the first, giving the Phillies seven stolen bases in as many chances. They are the lone major league club not to be caught on a steal attempt this season.

Since returning to the lineup on Tuesday after a five-game absence due to a bruised left hand, Gregorius is 4 for 6 with a double, three RBIs and four runs scored.

Rockies: OF Kris Bryant (back soreness) was sidelined for the second straight game. INF Brendan Rodgers (back) was a late scratch.

Phillies: In addition to Realmuto, INF Jean Segura was out of the lineup for rest.