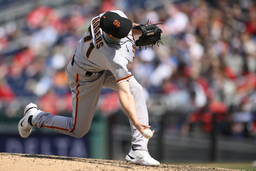 WASHINGTON (AP) Alex Wood pitched five effective innings and San Francisco's bullpen closed it out, leading the Giants to a 5-2 victory over the Washington Nationals on Saturday.

Wilmer Flores and Joc Pederson each had two hits for San Francisco, which won for the third time in four games. It beat Washington 7-1 in the series opener Friday night.

Wood (2-0) allowed two runs and four hits. The left-hander struck out five and walked one.

Wood's career ERA at Nationals Park rose slightly to 2.85 in eight starts. It is second best among all active pitchers (minimum 40 innings pitched) behind Jacob deGrom's 2.80.

"I had a lot of good battles against the Nats my first three years with the Braves," Wood said. "They've got a good mound, and just getting prepared and trying to stay sharp. I don't think there's one thing I can point to why I've had success here, but I like pitching here. It's a good part to pitch in."

After Wood departed, Dominic Leone, John Brebbia and Tyler Rogers each pitched an inning before Camilo Doval worked the ninth for his third save. The Giants' bullpen lowered its ERA to 1.78, best in the majors.

"Woody pitched a really good ballgame. I think he had one more inning in him," manager Gabe Kapler said. "We just thought it was the right moment to go to Dom ... and we felt like we could stretch through the game with a really good bullpen, a bullpen that's been pitching well for us."

Riley Adams homered for Washington in its fourth straight loss.

Aaron Sanchez (0-1), who pitched in nine games for the Giants last season, was called up from Triple-A Rochester to make the start for Washington. He lasted 4 1/3 innings, allowing four runs and six hits.

The Giants scored four times in the fifth to open a 5-0 lead.

After Luis Gonzalez's sacrifice fly made it 2-0, Thairo Estrada stole second and scored on Curt Casali's single, which chased Sanchez. Casali scored on a bases-loaded force at second and Pederson made it 5-0 when he singled through the shortstop spot vacated by the shift.

The Nationals rallied in the fifth on Adams' homer and an RBI single by Lane Thomas, but Wood struck out Juan Soto to end the inning.

Washington has scored nine runs in its past five games.

"I think we need to start relaxing, stay up the middle of the field. These guys are gonna hit," Nationals manager Dave Martinez said. "Don't try to do too much. Stay in the zone and take your walks."

Austin Slater turned in his second run-saving catch in two days for the Giants, making a diving grab in center against Alcides Escobar with two on in the sixth.

Mike Yastrzemski led off the game with a bunt single against the shift, and Gonzalez followed suit with one out and one on in the sixth. The Giants have seven bunt base hits on the season.

"The players ultimately are seeing the defenses and how they're lined up against them," Kapler said. "They want to take the opportunities when they feel like they can get a good pitch to bunt."

Nationals: 1B Josh Bell left with right hamstring tightness after the second inning, during which he walked and later ended up on third base. Martinez said Bell went for an MRI after the game.

Giants: RHP Logan Webb (1-1, 2.55 ERA) starts on Sunday. He gave up three runs and six hits in 3 2/3 innings in a loss to the Mets on Tuesday. He pitched three scoreless innings in his lone start against Washington in July 2019.