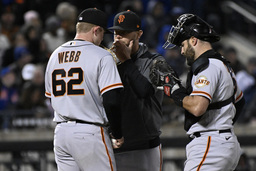 "He's like a colt bouncing around," Showalter said. "Reminds me of, you ever see those wild horses running free? That's him."

So far, the Mets have no regrets about betting on this particular pony.

Scherzer pitched no-hit ball into the sixth inning of his anticipated home debut and New York rode its $130 million ace to a 3-1 victory over the San Francisco Giants for a doubleheader sweep.

Francisco Lindor was the hero in the opener, delivering a game-ending single in the 10th inning of a 5-4 victory. That came moments after Pete Alonso's stretch at first base saved Lindor's off-target throw and kept the game tied.

Scherzer (3-0) hardly needed any help, combining with two relievers on a two-hitter.

The three-time Cy Young Award winner was overpowering for 5 2/3 innings before seeming to hit a wall. His velocity dipped and control wavered over consecutive walks to Mike Yastrzemski and Brandon Belt, and then Darin Ruf ripped an RBI single for San Francisco's first hit.

The 37-year-old Scherzer, slowed late in spring training by a balky right hamstring, finished out the sixth and then tossed a 1-2-3 seventh. He struck out 10 on a season-high 102 pitches, walking three in his first turn before his new home fans after signing a three-year deal in November.

"I knew I needed to control my pitch count tonight so I could pitch as deep as possible because of the doubleheader," Scherzer said.

Showalter said he planned to cap Scherzer at around 110 pitches, and they didn't discuss altering that plan had the no-hitter continued.

"He talks to me with his eyes," Showalter said.

Drew Smith allowed the Giants' only other hit in the eighth and Trevor May worked the ninth to earn his first save after closer Edwin Diaz pitched in the opener.

"I don't think he had his best command, and also I just don't think the baseball felt particularly comfortable in his hand tonight," manager Gabe Kapler said.

The Mets have won six of seven and improved to 9-3. After winning 107 games last year, San Francisco had been off to just as hot a start, but this double dip dropped the Giants to 7-4.

New York got to Webb in the third. Lindor doubled with one out for his second hit of the game, Alonso walked, and both scored on Eduardo Escobar's two-out double. Dominic Smith then scored Escobar with a single.

Lindor also had a tying double in Game 1, then lined a single to center against Jarlin Garcia (1-1) to score automatic runner Brandon Nimmo in the 10th.

A half-inning earlier, Lindor's throw on Thairo Estrada's grounder pulled Alonso off first base, apparently allowing Belt to score from third with two outs. Replays showed Alonso just barely held the base with his right foot, and umpires overruled the safe call. The grab kept Adam Ottavino (1-0) in line for the win.

"Pete staying on the bag there, that's a really hard play," Showalter said.

Joc Pederson hit a solo homer and Brandon Crawford had two RBIs as the Giants pounced early against Mets starter Tylor Megill for a 4-1 lead. New York erased that in the fifth, when starter Alex Cobb left with a right groin injury before Lindor's tying RBI double off reliever Dominic Leone.

Cobb was placed on the 10-day injured list after Game 1, allowing the team to activate right-hander Yunior Marte, who struck out three during a scoreless eighth. Kapler said Cobb would get an MRI, but Cobb said he was hopeful for a quick return.

"That was a brutal game for us," Cobb said. "Having two nine-inning doubleheaders, and then the starter coming out as early as I did, is putting the team in a bad position."

It was the first pair of nine-inning doubleheaders for either team since 2019 after Major League Baseball shortened twinbills to seven-inning games in 2020 and '21 as a pandemic adjustment.

KEEP IT IN PLAY

Giants pitchers haven't allowed a homer in their past seven games, a span of 268 batters.

Giants: IF/OF Jason Vosler was recalled from Triple-A Sacramento for the opener. IF/OF Luke Williams was optioned to Triple-A, but remained with the Giants as their 29th man for the doubleheader.