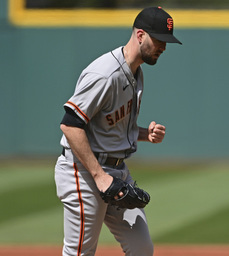 CLEVELAND (AP) Alex Wood didn't succumb to the cold or the Guardians.

Despite near-freezing temperatures, Wood took the mound Sunday wearing just his Giants jersey on top - like he does for every game.

Wood wasn't about to change his routine or do anything to alter San Francisco's run of steady starts.

Thairo Estrada homered and drove in four runs and Wood continued the team's strong starting pitching to open the season as the Giants completed a three-game sweep of Cleveland with an 8-1 win Sunday over the Guardians in football-like weather.

Estrada hit a two-run homer off Aaron Civale (0-1) in the second inning and Brandon Belt added a two-run shot in the seventh as the Giants won their fifth straight.

Wood (1-0) allowed just four hits without a run over five innings before turning it over to San Francisco's bullpen.

It was the ninth straight game in which a Giants starter allowed two runs or fewer, the second longest streak since 1901. Only the 1966 Chicago White Sox (11) have had a more extensive stretch to open a season.

"Just gotta keep rolling," Wood said. "It's not how you start, but how you finish. Everybody is really happy with this start we've had as a staff, and I think we've got some competitive juices flowing and guys want to back up what the guy does the day before."

Kapler, though, isn't all that surprised by what his pitchers have done.

"We're aware that our starters are pitching well," he said. "We expected it to be a strength of our club. They just come out and fill up the strike zone, that's exactly what we're asking them to do.

"All of them have left the games giving our bullpen a chance to hold it down and win games for us."

It was a tough opening weekend at home for the Guardians.

In their first series at Progressive Field since the club's name change, Cleveland managed just six hits and was held to four runs. The Guardians also had a couple defensive breakdowns that proved costly.

The game-time temperature was 35 degrees, the coldest for a first pitch in a Giants game since 1990. The Guardians might be more used to it, but that doesn't make it any easier to perform.

"Once you're out there, the weather becomes irrelevant," said Civale, who was pulled after four innings. "You can't use that as an excuse for anything. It's part of the game. Temperature is all a part of it. It's something that you've done it before and you know how to handle it."

The weather conditions weren't ideal for players or fans, but they didn't affect Wood in his first appearance against Cleveland since 2013 with Atlanta. The left-hander walked two and struck out five.

"You can see by his delivery, there's a lot of deception there," Guardians manager Terry Francona said. "But with it, there's also some movement. When he's been healthy, he's been really good. There's just been times when he hasn't been able to maintain his health, but he's a good pitcher."

Estrada gave the Giants a 2-0 lead in the second with his second homer, a shot to left field that barely cleared the 19-foot wall. Estrada's homer came after Wilmer Flores doubled off the wall in left-center with two outs.

Estrada picked up another RBI in the fourth, when the Guardians failed to turn a double play on his one-out grounder to short as second baseman Owen Miller's return to throw to first skipped into the photographer's pit for an error.

The Giants made it 6-0 in the sixth on Estrada's RBI double and Steven Duggar's run-scoring single off Eli Morgan.

Belt followed a leadoff walk to Austin Slater in the seventh with his third homer.

Cleveland's Austin Hedges ended the shutout in the seventh with an RBI single, his first hit after starting the season hitless in 21 at-bats.

Some flurries swirled in the ballpark as Kapler arrived in the dugout for his pregame media availability.

Stocking caps and winter gloves were again necessary with temperatures in the 30s and a stiff wind blowing in.

Kapler was asked if he remembered the coldest game he played in, and correctly guessed it came when he played for Colorado. What Kapler didn't remember of the 2003 game was that he got three hits.

"I did?" he said, joking he would dig up the video if his players complained about the cold.

Giants: Continue their four-city trip in New York with RHP Alex Cobb (1-0) starting the first of four games against the Mets, who will counter with RHP Tyler Megill (2-0).

Guardians: RHP Shane Bieber (0-0) starts the opener of a four-game home series against Chicago's Dallas Keuchel (1-0) and the White Sox.