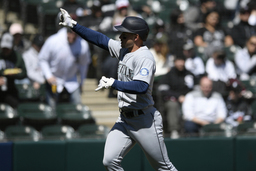 CHICAGO (AP) Jared Kelenic hit a two-run homer off the right-field foul pole in the second inning, and the Seattle Mariners stopped a four-game losing streak with a 5-1 victory over the Chicago White Sox on a windy Thursday when popups became adventures.

"It was like we were playing in a tornado," Kelenic said.

Chicago scored in the fifth after Adam Engel's two-out popup was blown from the middle of the infield into foul territory behind third base and dropped. Engel then reached second when his popup to the first-base side came back and kicked off the mitt of catcher Cal Raleigh in front of the plate for an error.

Jake Burger followed with a popup over the mound that drifted to the left side and fell for an RBI single, bouncing off the arms of shortstop J.P. Crawford, who tried for a basket catch with his back to the plate on the infield dirt.

"You see the ball change five different directions when it's in the air, it's tough to determine where it's going to come down," Burger said.

Logan Gilbert (1-0) allowed an unearned run and four hits in five innings, and four pitchers followed with an inning each of hitless relief.

Andres Munoz struck out the side on 14 pitches in the sixth, reaching 102.8 and 102.5 mph, Seattle's fastest pitches since Statcast began tracking in 2015.

Drew Steckenrider worked around a walk in the seventh, Diego Castillo pitched a perfect eighth and Paul Sewald threw a 1-2-3 ninth.

Chicago didn't get a hit after Tim Anderson's two-out single in the fifth.

Cal Raleigh homered off Bennett Sousa in the seventh and Mitch Haniger hit another home run against Jose Ruiz in the eighth, both taking advantage of 30 mph wind blowing out to left field.

Jimmy Lambert (0-1) gave up two runs and two hits in three innings of his season debut. He walked Eugenio Suarez on four pitches before Kelenic's blast off the right-field post.

"The four-pitch walk before that was the killer," Lambert said. "Leadoff walks and two-out walks, they'll always come back to bite you. It's basic baseball. Never fails."

Kelenic's home run on a 114 mph drive was his first this season.

Raleigh's homer was his second hit in eight at-bats this season. The catcher added that he was looking forward to Friday's home-opener against the Houston Astros back in Seattle.

"Me, Logan Gilbert and (pitcher) Matt Brash all have an apartment, and we're looking forward to it and seeing all the fans," Raleigh said.

White Sox: LF Eloy Jimenez didn't play after leaving Wednesday's game in the fifth inning with a bruised left ankle. "It was hurting a little bit, but all the treatment, this morning I'm feeling fine," Jimenez said. "Today is just for precaution. After that, it's all good." La Russa said INF Josh Harrison has some soreness in his back, but could be back sometime this weekend.