Schwarber goes deep for Phillies in 9-5 win over Athletics 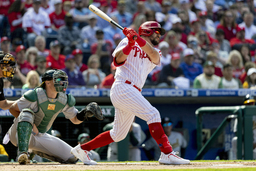 PHILADELPHIA (AP) Rhys Hoksins took an informal poll inside the clubhouse on the popularity of new Phillies slugger Kyle Schwarber.

So did Phillies fans on opening day. And his teammates dig him, too.

Schwarber slammed a homer off the second-deck facade in his first at-bat with the Phillies, flashed a "1" finger toward his teammates and thrust his helmet in the air for a rousing curtain call as a sellout crowd of 44,232 went wild.

His 14th career leadoff homer could be a sign of the slugging to come.

Reigning NL MVP Bryce Harper also knocked in a run and Aaron Nola struck out seven to lead the Philadelphia Phillies to a 9-5 win over the Oakland Athletics on Friday.

"It's a little early for a first-inning curtain call," Schwarber said with a laugh. "But it was a real exciting moment."

That's $179 million on two sluggers that Harper pushed the front office to sign to improve the team following an 82-80 finish last season.

Schwarber got the offense rolling when he crushed a 427-foot homer to right off A's starter Frankie Montas (0-1) on just his seventh pitch of the game.

The fun was just getting started in Philly.

Schwarber's one-out walk in the third inning ignited a four-run burst. Harper heard rousing "MVP! MVP!" chants that followed him from opening day introductions to his last at-bat. He showed why he earned that award last season with a hit to left that he stretched into a double. He was called out on the throw but stayed on second base as the play was reviewed. The crowd howled in delight with each replay on the big screen that showed Harper slid safely under the tag of second baseman Tony Kemp. The play was overturned and Harper scored on Hoskins' two-RBI single. Didi Gregorius' single up the middle made it 5-0.

That's the kind of inning the Phillies had in mind when they beefed up the offense to try to snap a postseason drought that dates to 2011. Schwarber, who added an RBI single in the eighth for a 9-5 lead, won a World Series with the Chicago Cubs and has played in the postseason in six of his seven seasons in the majors.

Nola, the 2018 All-Star who went 9-9 with a 4.63 ERA last season, made his fifth straight opening day start. Chad Pinder hit a solo homer in the fourth. Seth Brown's three-run shot in the seventh chased Nola (1-0). The A's made it 6-5 but Brad Hand struck out Jed Lowrie looking with runners on second and third to end the seventh.

"He'd done pretty well in that part of the lineup and it just seemed like he was getting the ball up a little bit and they made him pay," Phillies manager Joe Girardi said.

Castellanos added an RBI double in the seventh for a 7-5 lead. Castellanos held a beer in one hand as he played table tennis in the clubhouse and Jay-Z blared through the room. He endeared himself to his new fans as he stuck around after the final out and autographed baseballs passed to him through the netting.

Several Phillies wore T-shirts with a quote from Castellanos at his news conference after he signed with the team: "I don't have a college degree, I hit baseballs."

No degrees. But straight A's for the Phillies in Game 1.

"I think it describes a lot of the personalities in this clubhouse, man," Castellanos said. "We're a bunch of kids that get to play baseball."

The Phillies put OF Mickey Moniak on the 10-day IL with a broken right hand. He was injured Wednesday in his last at-bat of spring training and could miss up to six weeks.

The Phillie Phanatic parachuted his way onto the field before the first pitch for the first time since 1993.

The Phillies in the offseason settled a legal dispute with the Phanatic's creator that allowed baseball's most beloved native of the Galapagos Islands to return to his natural green, furry, bulbous-belly state.

The Phanatic wasn't the only part of the Phillies that needed a facelift. The home run Liberty Bell had been on the fritz the last few seasons but was repaired in time for opening day. Phillies executive vice president David Buck said 26,000 LED lights were added to the bell and a new hydraulic system was installed to make the bell sway when the Phillies go deep.

Bryson Stott made his major league debut for the Phillies as the starting third baseman. Stott, the 14th overall pick in the 2019 amateur draft, singled in the sixth for his first hit. His first career double and RBI in the eighth made it 8-5. He dedicated his call-up to - and wears No. 5 in honor of - his childhood best friend, who died six years ago of cancer. Stott called Cooper Ricciardi's mother on Thursday and said she was in tears over the news.

It was a loss in his debut for first-year Oakland manager Mark Kotsay. Kotsay was promoted from third base coach to manager and replaced Bob Melvin. Kotsay said his first big league game over a 17-year career was in Philadelphia in 1998.

"The last seven years, (you) grind through coaching to get to this point," he said. "You know, the reward of it all, the moment will happen quickly. It will be over and then the grind will start."

Oakland sends LHP Cole Irvin to the mound against Phillies RHP Kyle Gibson in the second game of an all-afternoon three-game series.