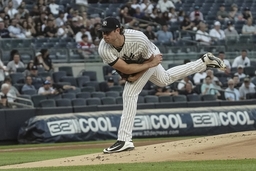 As the club with the best record in baseball, the New York Yankees have bucked one major trend through the first half. They're not struggling to beat the Tampa Bay Rays.

The two American League East forces meet for their third series of the season when they open a three-game set Monday night in St. Petersburg, Fla.

In the previous two meetings, at the end of May and then again last week, the first-place Yankees shook off their recent poor showings against their division rival by splitting a four-game series in Florida and taking all three in the Bronx -- 5-2 overall.

That hasn't been the case the past two seasons.

In the pandemic-shortened 2020 campaign, manager Aaron Boone's lineup went 2-8 against Tampa Bay and was beaten 3-2 in the best-of-five AL Division Series in October.

Last season was better, as New York managed to win eight of 19 matchups.

The host Toronto Blue Jays beat the Yankees 10-9 on Sunday, snapping New York's nine-game winning streak. It was also just the second loss for the Yankees in to just its second loss in 18 games this month.

"I understand where we are. I understand the kind of start we're off to and the kind of position we're in, and I'm thrilled about that, obviously," Boone said before the series with Blue Jays. "But we also understand, as a team and as a group, we ain't done nothing yet."

On Monday, Gerrit Cole (6-1, 3.33) will look to beat the Rays for the second time in a week when he makes his third start of the season against them.

After a no-decision on May 28 (one run and two hits in six innings), the right-hander was even better Tuesday. He was triumphant with six shutout innings, allowing five hits and a walk with seven strikeouts.

After being swept in three games against the Yankees in the Bronx last week, the Rays traveled down to Baltimore -- a team they had beaten 27 times over a 29-game stretch from Aug. 25, 2020, through the first weekend of this season -- and were whitewashed 1-0 Friday.

That shutout was a fourth consecutive weak offensive output by a Tampa Bay batting order that has repeatedly slid into extensive slumps. They scored just four runs in four games in the sweep against the Yankees and the opener against the Orioles.

On Sunday, the Rays wasted a strong start by Corey Kluber, losing 2-1 in Baltimore to fall for the second straight series against the Orioles.

"It's been a frustrating road trip," manager Kevin Cash said after the Rays lost for the seventh time in nine games. "We've got to get back home and find some kind of rhythm."