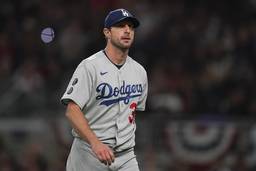 For a fifth time in two seasons, the Atlanta Braves will take the field knowing that one victory will launch them into their first World Series in over two decades, although on Saturday they finally will have a distinct advantage.

The Braves will take on the Los Angeles Dodgers on Saturday in Game 6 of the National League Championship Series with the home crowd behind them, giving them hope that they can finally find a nine-inning formula to reach the Fall Classic for the first time since 1999.

A 3-1 lead in the NLCS over the Dodgers last season gave the Braves three chances to advance. But Los Angeles dispatched all of those Atlanta chances, doing it in the neutral-site setting of Arlington, Texas.

Thursday's potential NLCS clincher against the Dodgers took place at Los Angeles, and while it looked promising with an early Freddie Freeman home run, the opportunity fizzled. The Dodgers' Chris Taylor hit three home runs, while AJ Pollock added a pair as Los Angeles rolled to the 11-2 victory.

The Braves say they're ready this time. They aren't about to fret about who might have momentum, not when they won the first two games of the series in dramatic fashion, only to see the Dodgers do the same in Game 3. And it's not like the Braves' big 9-2 victory in Game 4 bled over into Game 5.

"I think we're going to be just fine," Freeman said. "We got Ian (Anderson) on the mound. He's already itching to get going. ... We're going to be looking forward to getting in front of our home fans. Just really two good teams. It's going to be a good series just like we thought so coming down to Game 6 and 7."

Los Angeles was expected to counter with Max Scherzer, but the ace right-hander was scratched from the start. Scherzer gave up two runs over 4 1/3 innings of Game 2 on Sunday and said afterward that his arm was "dead."

In his absence, the Dodgers will turn to Walker Buehler on short rest. He initially was slated to start a potential Game 7 in the series.

Buehler came back on short rest to pitch Game 4 of the NL Division Series against the San Francisco Giants, and he turned in 4 1/3 innings of one-run ball as the Dodgers posted a 7-2 victory to force a decisive fifth game, which they won.

"I expected our guys to fight and scratch and claw and I thought we did that and it's going to be a crazy environment in Atlanta. We know that," Dodgers manager Dave Roberts said. "I like the guys we're going to be running out there and we've just got to go out there and play to win one game. So our backs are against the wall, and I don't expect a letdown."

The Dodgers have won seven consecutive playoff elimination games going back to last year's NLCS and looked like the far more comfortable team in Game 5. Since the last weekend of the regular season, they have lost Clayton Kershaw, Max Muncy, Justin Turner and Kelly to injury, yet they keep surviving.

"I think we're always confident," Pollock said. "We always feel like ... we're going to win. So I think elimination, not elimination, it doesn't matter. We feel good about our team and our chances."