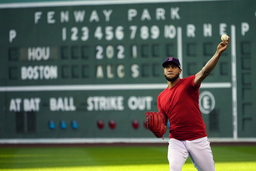 J.D. Martinez and Rafael Devers put on a grand display of power on Saturday to help the Boston Red Sox even their American League Championship Series with the Houston Astros at one game apiece.

Now the Red Sox will return home to Fenway Park with momentum on their side as they host the Astros for a pivotal Game 3 in their best-of-seven showdown on Monday night.

Martinez and Devers became the first pair of teammates in postseason history to hit grand slams in the same game, doing so in the first and second innings respectively of Boston's decisive 9-5 win in Game 2 on Saturday at Houston.

"I think we like where we're at," Red Sox reliever Adam Ottavino said Sunday. "I think offensively we feel like we can score against them."

Boston also got a fourth-inning solo homer from Enrique Hernandez, who continued his torrid month of October with a 2-for-4 performance to make him 16-for-32 (.500) with five home runs and nine RBIs through seven postseason games.

A career .242 hitter, Hernandez has an MLB-record 15 hits over his last five playoff games and became the first Red Sox batter to homer five times in five postseason games. He has already matched Todd Walker (2003) and David Ortiz (2004 and 2013) for the club record for home runs in a single postseason.

"I don't know (what's been different for me)," Hernandez told FS1 in a postgame interview. "I guess (I'm) feeling good and the importance of the game is allowing me to stay focused and stay locked in."

The Astros fought back out of a 9-0 hole on Saturday to make it a four-run game after scoring three in the fourth and two in the ninth. Houston also scored five runs in its series-opening 5-4 win over Boston in Game 1 Friday.

"We've got to try to figure it out," Houston manager Dusty Baker said. "We won the seventh, eighth and ninth, but those two innings in the beginning -- that's a tremendous mountain to climb."

Carlos Correa, who was the Game 1 hero with an emphatic tiebreaking solo homer in the seventh, finished 1-for-4 with a strikeout on Saturday. Yuli Gurriel (2-for-4, three RBIs) and pinch hitter Jason Castro (1-for-1) each clubbed solo homers in the Game 2 defeat.

Already without injured ace Lance McCullers Jr., the Astros' rotation took another blow in the form of an injury to Game 2 starter Luis Garcia. He exited after serving up the grand slam to Martinez, leaving potential Game 4 starter Jake Odorizzi to pitch in a surprise mop-up role.

"I was caught off guard by it. I think everybody was," Odorizzi said. "I sucked up four innings. That's the best way of putting it. Those can be crucial as we move forward in the series."

Houston right-hander Jose Urquidy is set to make his postseason debut in a critical spot as he starts Game 3. The 26-year-old had been in line to start Game 4 of the team's AL Division Series against the Chicago White Sox before it was rained out.

Boston counters with left-hander Eduardo Rodriguez (0-1, 5.40 ERA). The 28-year-old went winless in two playoff starts against Tampa Bay in the ALDS and is 0-1 with a 7.02 ERA in 10 career postseason games (three starts).

Rodriguez struggled in two regular-season starts against Houston as he went 0-1 with an 11.57 ERA in 9 1/3 innings. Overall, Rodriguez is 1-3 with an 8.53 ERA in six career starts against the Astros.