Red Sox turn to Nathan Eovaldi in Game 2 vs. Astros 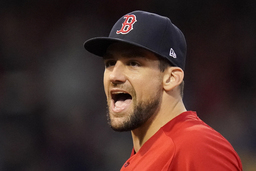 Nathan Eovaldi admittedly loves pitching in the postseason, and the Boston Red Sox certainly are thankful for that.

The Red Sox will look for another solid playoff performance from Eovaldi on Saturday when the right-hander starts Game 2 of the American League Championship Series against the host Houston Astros.

While the Astros benefited from homers by Carlos Correa and Jose Altuve to rally to a 5-4 victory in Game 1 on Friday, an underlying issue for the Red Sox was yet another abbreviated outing from a starting pitcher.

Enter Eovaldi, who is 1-0 with a 2.61 ERA in the 2021 playoffs. He sports a 3-1 career postseason record with a 1.93 ERA in eight appearances (four starts). The lone loss, however, came during a yeoman's effort in which he worked six innings in an 18-inning marathon loss to the Los Angeles Dodgers in the 2018 World Series.

Eovaldi's gritty effort was roundly celebrated by the team and the fanbase, as it helped save the bullpen and got the Red Sox back on track. Boston answered his performance with back-to-back victories to capture its ninth World Series title.

"I feel like you're definitely a little more locked in, you're more focused," Eovaldi said recently of pitching in the postseason. "The energy and the atmosphere, too. Being in the stadium, the fans are locked in from the first pitch on. To be able to battle in those games, it's a lot of fun. The energy throughout the dugout, everybody's locked in and contributing."

Eovaldi hasn't disappointed this postseason, including a one-run, four-hit performance over 5 1/3 innings to dispatch the New York Yankees in the AL wild-card game on Oct. 5. He followed that up five days later with five strong innings in a no-decision against the Tampa Bay Rays.

Eovaldi, 31, surrendered five runs on 11 hits in 5 2/3 innings to take a loss against the Astros on June 9. The Houston-area native is 1-2 with a 3.93 ERA in six career starts versus the Astros.

Altuve, who belted a two-run shot in the series opener, is 6-for-19 (.316) with three solo homers against Eovaldi.

Correa, who launched the go-ahead shot in the seventh inning on Friday, is 5-for-16 (.313), all singles, versus the hurler.

Houston right-hander Luis Garcia will provide the opposition on Saturday.

Garcia, 24, escaped with a no-decision on Sunday despite permitting five runs on as many hits in 2 2/3 relief innings against the Chicago White Sox.

He pitched significantly better in his lone career start against Boston on June 1. Garcia allowed one run on five hits in seven innings of a 5-1 victory.

Boston's Enrique Hernandez went 0-for-3 with a walk in that game, but he has been on an absolute tear in the playoffs.

The center fielder went 4-for-5 with two home runs on Friday. He set a major league postseason record by amassing 13 hits in a four-game span.

With ace Lance McCullers Jr. sidelined with forearm tightness, Astros manager Dusty Baker is well aware that he'll need to rely on pitchers such as Game 1 starter Framber Valdez and Garcia to cool down the Red Sox.

"Framber was our No. 1 pitcher during the playoffs last year. Luis Garcia, he was down with the COVID team, and here he is pitching (now)," Baker said. "Sometimes you're forced to grow up sooner than you want to, and they've made some tremendous strides in growing up and being a professional."